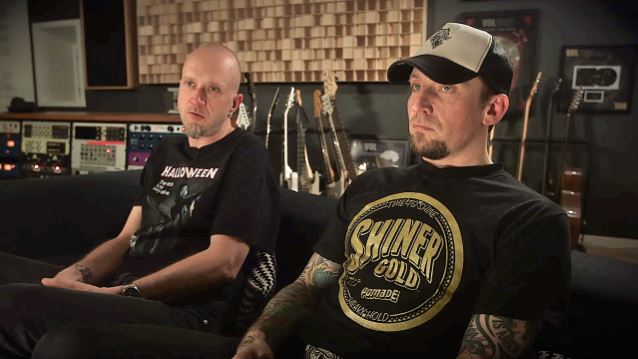 VOLBEAT guitarist Rob Caggiano previously told Metal Hammer about his band's version of "Rebound": "This is a cover song. It's originally by a band called TEENAGE BOTTLEROCKET, who are also good friends of ours. We took them out on one of our European tours on the last album cycle and they're a really awesome band. They very much have the spirit of the RAMONES in their music, and we love that vibe. 'Rebound' is a song that we all love, too. The lyrics are great, and it's really funny and really catchy. We'd talked about covering it in the past, but for whatever reason, we never got around to it. We got the news while we were in the studio that their drummer had died, and that really hit us hard. So we learnt the song and recorded it as a tribute to those guys."

"Seal The Deal & Let's Boogie" was released on June 3 via Republic Records.

VOLBEAT will spend most of the summer in Europe, returning in August for SEETHER's Rise Above festival in Maine on August 6, the Heavy Montreal event on August 7, and an opening slot for METALLICA at the U.S. Bank Stadium in Minneapolis on August 8.