"Hokus Bonus" brings several songs such as "Slaytan", "Under The Influence" and "Immortal But Destructable" to the vinyl format for the first time ever, and includes early versions of fan favorites "Evelyn", "Black Rose" and "Die To Live". The album also marks the first time that the European smash hit single "For Evigt" will be commercially available on vinyl in North America.

"We all spend a lot of time in record stores both at home and on tour," said the band, "and bringing these songs to vinyl, some of them for the first time ever, brings us great joy. We hope our fans are looking forward to 'Record Store Day' Black Friday as much as we are!"

"Hokus Bonus" will be available November 27 at independent record stores participating in "Record Store Day". For a full list, go to this location.

This past June, VOLBEAT frontman Michael Poulsen told "Whiplash", the KLOS radio show hosted by Full Metal Jackie, that he was "very much inspired" to write new songs. "I can't wait to start working on these songs in the studio when the time is right, because there's a certain energy that really, really takes me back to the beginning," he said. "There's a lot of heavy stuff in some of the new songs that I've got."

Speaking about how the new VOLBEAT music compares to last year's "Rewind, Replay, Rebound" album, Poulsen said: "I know for sure that what I'm writing right now is not really similar. That's gonna be another different VOLBEAT album, because if I was writing an album like that again, I would be old before I want to. So right now I'm doing a lot of spontaneous VOLBEAT songs that have really a lot of… [It's] uptempo, it's heavy, it's very riffy, there's even thrash songs, but again, there's also these really huge rock songs. Right now, I'm in a place where I'm kind of revisiting some of more uptempo and more heavy stuff. So I'm very excited about my whole situation when it comes to writing for VOLBEAT."

Michael went on to discuss his songwriting process in more detail, saying: "Writing is such an emotional thing — things have to come to you very naturally and then you just have to go with the flow. You can sit down and you can ask yourself, 'Where am I going with this?' And if you try to change it, it becomes another monster, and it's not necessarily a monster you wanna work with. So you just have to go with what your heart tells you. And that's what I'm doing also right now with the stuff that I'm writing right now, because I think everybody's kind of getting crazy being locked up in their own home. We have a lot of energy we wanna burn out. Even though I run every morning, I still have a ton of energy that I need to get rid of, and I get all that energy out in the new VOLBEAT music. That's why I'm saying that what I'm writing right now is more uptempo. I's very, very, very spontaneous writing, and there's a lot of energy in it."

This past May, VOLBEAT's U.S. tour with CLUTCH and THE PICTUREBOOKS was officially canceled due to the coronavirus pandemic which is sweeping the globe.

"Rewind, Replay, Rebound" was released in August 2019 via Republic Records. The disc was produced by longtime collaborator Jacob Hansen and co-produced by guitarist Rob Caggiano and Poulsen. It marked VOLBEAT's the first studio album with Kaspar Boye Larsen on bass. 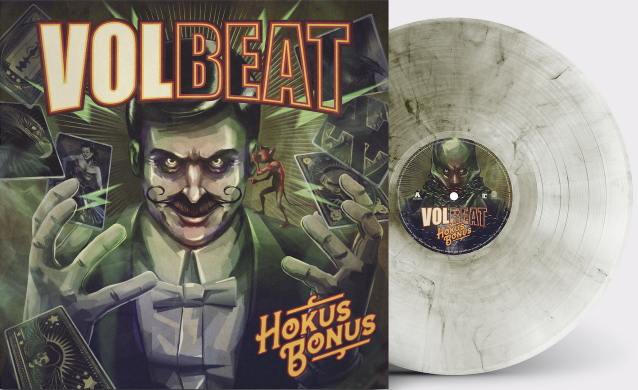