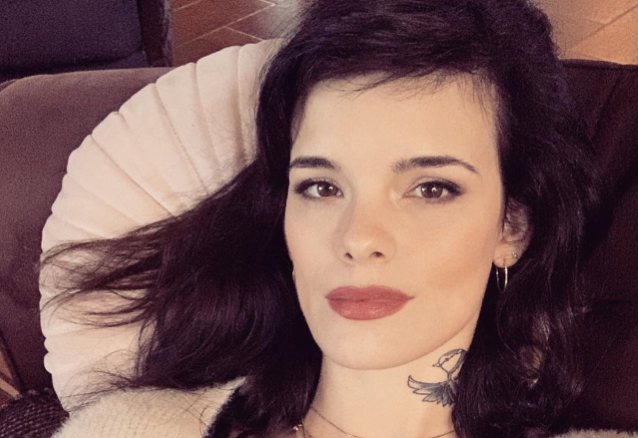 VISIONS OF ATLANTIS singer Clémentine Delauney was a guest on the "Side Jams With Bryan Reesman" podcast, where she spoke about her life-changing transition to veganism, being nonjudgmental of meat eaters, as well as the misunderstanding over the band's statement last year about Black Lives Matter.

Delauney said she started her journey to veganism five years ago when she stumbled across online videos that documented what goes on inside slaughterhouses, and the warehouses were chickens, pigs, and cows were being raised for food.

"When I realized all the cruelty and the pain that I was taking part of by buying meat and dairy from the food industry, I decided that's not something I wanted to support anymore," Delauney said. "I didn't want to switch to consuming things only from small farms and so on. I thought this was just a smaller part of the problem. I thought, 'Let's make a real choice. Let's not support any of this so I can compensate for people who would just go halfway and just be vegetarian, which is great enough. But let's put all I can on my side so I don't support any of this whatsoever.' I quit meat quite fast, and then a year afterwards, I was completely vegan."

But while some vegans can come off very strong on their views about meat eating, the singer told "Side Jams" that she does not talk about it.

"That's the best thing that works on my side," she explained. "People know about it — my friends, my bandmates, and so on. My drummer is a very meat-oriented person, and he tried to become vegan just because he saw that I could be and everything was fine. He had heard that it's better for your health and so on, so he tried. I know that if I would have preached for that, or if I tried to turn people, they would have been completely on a defense mode because they would feel attacked, like if I would judge them. I think this is the worst way — when you try to convince someone of something, you don't want to judge them because if they feel judged, they will never listen to you. So I just was myself. I want to show an example. I want people to understand and believe that this is possible and this is nice, and it's as healthy and colorful and still tasty. So I share my own food sometimes that I cook on Instagram, and I talk about just vegan food being good. I'm just saying I am having a good time. I try not to preach at all. I have people following me through VISIONS OF ATLANTIS, fans who already said, 'I'm turning vegetarian because of you!' I didn't do anything. I just communicated in the most and enthusiastic and natural way about it."

Delauney also addressed a misunderstood statement that VISIONS OF ATLANTIS made last year regarding the Black Lives Matter movement. The day after many people and organizations posted a black square on their social media pages in solidarity with the movement, the band shared their vision of what it means to live together. They invoked All Lives Matter without knowing what the real connotation was.

"The problem was that we didn't know that the words we used were used in the U.S. by certain other parties that are extreme right parties and so on," Delauney said. "We got insulted. We got bashed completely by American people because we made a diplomatic mistake. But it was just a mistake. And I was amazed by the rapidity with which these people judged us instead of trying to understand what we actually meant in our message which was a positive message of inclusiveness. Like having everyone on board, like we all live in here together. No one should feel excluded. And that's what we meant, and our message was totally misinterpreted."

Being European, the group did not have the same context of the BLM story broadcast across the media there. "We also have to deal with minorities and communities in our countries that create different kinds of tensions," Delauney said. "Of course, we're not racist, and we think it's so unfair that someone would get treated differently because of their skin color. Yes, this is awful. But we can't get the sense of that the way an American citizen does. It's impossible. We don't have the culture. We don't live in the United States."

The group is currently working on a follow up to their 2019 album "Wanderers".