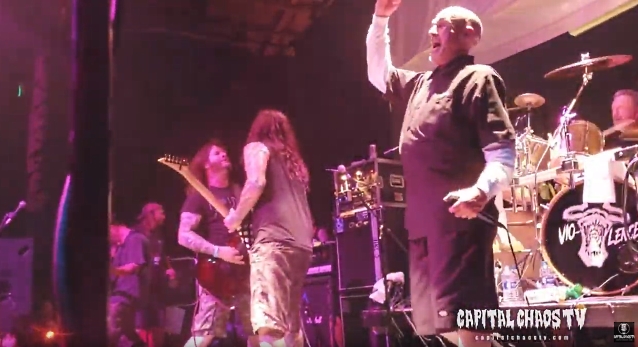 San Francisco Bay Area thrashers VIO-LENCE were joined by Gary Holt (EXODUS, SLAYER) on stage on April 14 at the Oakland Metro in Oakland, California for a performance of the EXODUS classic "A Lesson In Violence". Multi-camera video footage of his appearance can be seen below (courtesy of Capital Chaos TV). The concert took place one day after VIO-LENCE's first comeback show at the Oakland Metro.

VIO-LENCE has several more concerts scheduled for the coming months, including a European appearance at the Alcatraz Hard Rock & Metal Festival in Kortrijk, Belgium; shows with SACRED REICH in Los Angeles and Phoenix; and two gigs in Brooklyn, New York.

Although current MACHINE HEAD frontman Robb Flynn was part of VIO-LENCE's classic incarnation and played on the band's debut album, "Eternal Nightmare", he wasn't contacted about doing the comeback shows.

Asked about the possibility of more VIO-LENCE shows and new music after the currently scheduled performances, Demmel told Decibel: "There's no tour involved. There's guys in the band that work and have families and need to be at home, so we'll assess all of that and see who can do what. I think we just need to get through these first shows and prove to ourselves that we can do it and also prove to everybody else, see if we have a product and if the quality is there and if we're able to pull it off. Not closing the door on anything."