Set to take place on March 25 at Vamp'd in Las Vegas, the ceremony will be hosted by Las Vegas personality Steve Hart from Mandalay Bay's legendary Foundation Room. Most inductees will walk the red carpet meet-and-greet for press and fans and will participate in video interviews to be posted on RockGodzHallofFame.com. No gathering of musicians would be complete without hearing them play, so all inductees will hit the stage to perform their biggest or most popular hits. The JET VELOCITY ALL STAR BAND, which is fronted by RockGodz' own Janea and Jason Ebs from ECOTONIC and also features Lez Warner, Gregg Fox, and Mikey Bones Gerbino, will bring down the thunder for a night of rock and roll and celebration. Merchandise will also be available for purchase at the show.

Rock Godz Hall Of Fame is founded on the idea that some of rock music's most profoundly important contributions have been made by a group of heretofore unheralded musicians. History, albeit unjustly or ignorantly, sometimes overlooks these unsung warriors, these astonishingly gifted players who may not have ever been duly recognized or celebrated. Rock Godz Hall Of Fame is driven to change all of that by honoring the individuals and bands and highlighting their past and current contributions to rock and roll.

Tickets are $15.00 and can be purchased at the door or at Eventbrite. 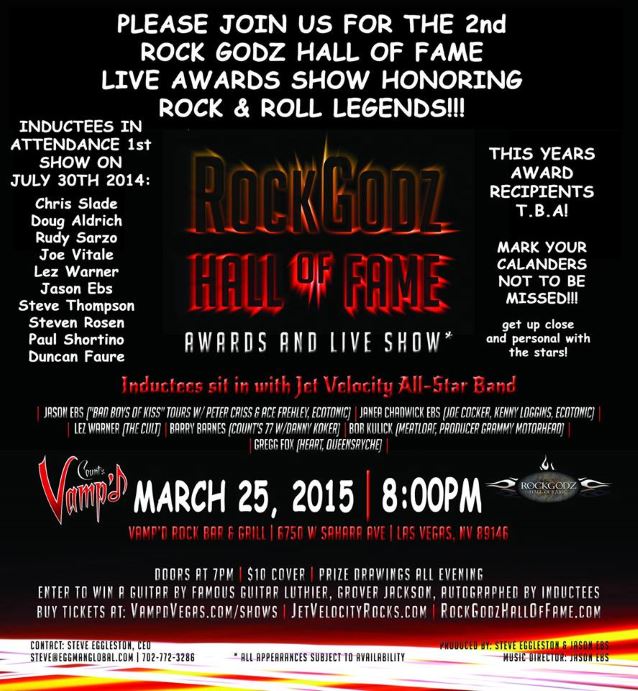