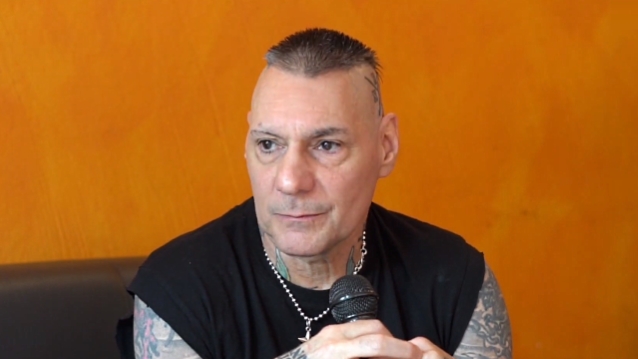 On the 35th anniversary tour of AGNOSTIC FRONT's influential "Victim In Pain" debut:

Vinnie: "I call it 'the greatest mistake of my life.' Because the timing's off, the tempo's off. It was a 16-track recording. At the time, 16-track was a big deal."

Vinnie: "We're writing a new album right now. I just got offstage to come up here to do this interview as we're writing the record now. We're going to record it within a month or so."

On how the songwriting on "Victim In Pain" compares to AGNOSTIC FRONT's more recent output:

Vinnie: "It's a lot more intricate, I guess you could say. It's recorded different. The guitars are different. The studios are different. Distortion boxes, the pedal on the floor. Years ago, the distortion boxes were heavy and you opened up the guts and it had big chips in it. Just like you're looking at a lot of old electronics. Because those chips hold a lot of carbon and elements in there, it just resonates that sound that you want. Now everything is microchipped. It's programmed in there. It doesn't have that unnatural… I don't know — it's a little different. It's done different now."

On whether AGNOSTIC FRONT has a "concept" in mind for their next studio album:

Vinnie: "Maybe like a trilogy of stories. Life in the fast lane, life without life. Just about life and stuff like that. I didn't make the pace of the record yet. Usually you try to make a good pace, like one song after the other. We're still in the recording stage. We didn't name it or anything. I want to name it 'The Great Vinnie Stigma' but they don't want to go for that. [Laughs]"

Vinnie: "I practically lived in CBGBs. I cracked my head open at CBGBs doing a stage dive. I broke my finger there. My friend got drunk, took off all his clothes and he jumped over the bar. It's, like, 'Wow, this guy is crazy.' A lot of crazy, a lot of good, a lot of fun, a lot of years. I'm so honored that I have a live album from [club owner] Hilly [Kristal]. It was only 10,000 days long, CBGBs, and I got a slice of one day on a record. I used to do so many benefits. We used to do can [food] drives for the homeless. I helped out a lot. I'm glad I did. A lot of great days. That was my home."

AGNOSTIC FRONT will embark on a North American tour this September celebrating the 35th anniversary of "Victim In Pain". The 17-date trek will kick off in St. Louis on September 18 and will feature PRONG as direct support.