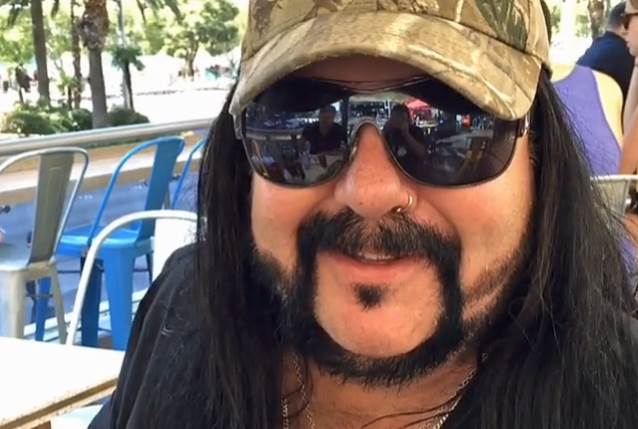 Vinnie Paul Abbott told Metal Hammer in an interview that he wanted GUNS N' ROSES' classic debut album, "Appetite For Destruction", played at his funeral. The former PANTERA drummer explained: "I'd really want to choose an album that was a goddamn good time, like fuckin' GUNS N' ROSES. I'd want people to celebrate what we've done and the fact that we'd had a great life. I wouldn't want my funeral to be a sad, sappy thing. I'd have the whole album, but 'Paradise City' and 'Welcome To The Jungle' would give off a positive vibe."

Vinnie Paul passed away on Friday (June 22) at the age of 54. He apparently died in his sleep at his home in Las Vegas. No cause of death was given at press time, but sources close to the drummer told the Las Vegas Review-Journal that he suffered a "major heart attack."

Over the weekend, GUNS N' ROSES members Slash and Duff McKagan paid tribute to Vinnie, with Slash writing on Twitter: "Tragic news about Vinnie Paul today. He was one of the warmest people I knew. A truly good & fun friend. We're going to miss you more than you could possibly have known. RIP buddy." Duff added in his own tweet: "RIP Vinnie Paul. Friend. Humorist. Badass drummer. All-around good man. Condolences to the family. You will be missed bro..."

In a 2016 interview with Meltdown of Detroit, Michigan's WRIF radio station, Vinnie spoke about the impact "Appetite For Destruction" had on him at the time of its release. "It was huge, man," he said. "Before PANTERA got a record deal, that album came out, and we covered just about every song on that record, man, and it was before that band blew up. We were such fans of the music. And it took that record about a year before it caught on, and then it caught on. Man, it's one of my all-time favorite records. To this day, [ the song] 'Welcome To The Jungle', you hear it in front of every football game, in front of [every] hockey game; it won't go away. And that's a great thing, man, when there's a song that has that kind of life. And then, of course, they're back doing it and they're touring. I saw them the other night at the big, gigantic [AT&T Stadium] here in Dallas, and I thought it was amazing."

Vinnie went on to say that seeing GUNS N' ROSES perform during the "Not In This Lifetime" stadium tour exceeded his expectations. "I've seen GUNS many, many times, and I'm telling you, man, this is the best, I think, I've ever seen Axl, man," he said. "He's really spot-on, and he's really singing great. And Slash doing his solo thing for so long, he's always had his chops up to par. So it's great to see those two really at their 'A' game with these songs again."