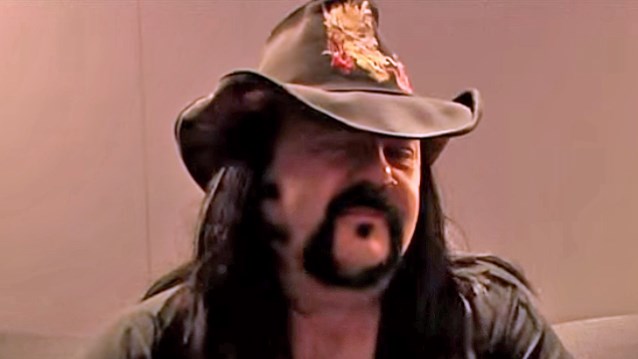 Josh Maloney, who works in artist relations at ddrum, counducted an interview with former PANTERA and current HELLYEAH drummer Vinnie Paul Abbott at this past weekend's NAMM show at the Anaheim Convention Center in Anaheim, California. You can now watch the chat below.

Speaking about HELLYEAH's recent and upcoming activities, Vinnie Paul said: "The [latest HELLYEAH] record ['Blood For Blood'] came out June 17 last year. It's done very, very well. Right now we have the No. 9 single in the United States Of America with 'Moth', which is the first time I've been in the Top 10 in ages, which is a beautiful thing. We just finished doing a huge support tour for FIVE FINGER DEATH PUNCH and VOLBEAT, which was amazing, and before that, for AVENGED SEVENFOLD. So we really haven't had a chance to headline and play a lot of the new songs yet. So starting on February 6 at the Brooklyn Bowl in Las Vegas, we start our headline show. We've got DEVOUR THE DAY, LIKE A STORM and ARCHER with us, which was just added on to it too, also. So, three killer new bands that are coming out, and we get to play a full headline set. A lot of stuff off 'Blood For Blood', and things are going great, man."

He added: "We have another run in the United States in April and May. Then we go to Europe in June and July. Then Australia, Japan, the whole Pacific Rim, and then one more trip to Europe before we start thinking about the next record. So you'll definitely have an opportunity to see us on tour, and come and check us out, 'cause we are on fire right now."