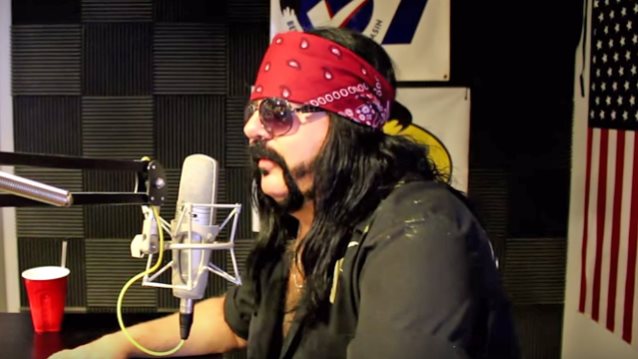 Former PANTERA drummer Vinnie Paul Abbott says that he was "floored" by the recent shooting death of Christina Grimmie, explaining that he "never thought" another musician would lose his or her life to an obsessive fan.

Grimmie, a former contestant on NBC's "The Voice", was shot and killed following her June 10 performance in Orlando, Florida. The suspect, identified as 27-year-old Kevin Loibl of St. Petersburg, Florida, didn't appear to know Christina personally and is believed to have traveled to Orlando specifically to attack her and then fatally shot himself.

The manner in which Grimmie was murdered struck a chord with Vinnie Paul, whose brother, PANTERA guitarist "Dimebag" Darrell Abbott, was killed onstage more than a decade ago.

During an interview with the KBAT 99.9 radio station in Odessa, Texas, Vinnie spoke about how he felt when he first heard about the way Grimmie lost her life. "It just floored me, man," he said (see video below). "I never thought it would happen again after [Dimebag's murder]. And that's really almost the same scenario that happened to my brother.

"It's just unbelievable that there's still people that are that fanatical and that crazy out there in today's world that we don't have enough security to keep that from happening."

Vinnie added: "It's a dangerous world, man. You've gotta keep your eyes and ears peeled and be on the alert all the time."

Two days after Grimmie's death, PANTERA issued a statement calling out the concert industry for not doing more to prevent future tragedies. The group posted a Facebook message juxtaposing pictures of Grimmie and Abbott. They wrote: "After Dime's murder, we all prayed that our industry (i.e. club owners & promoters) would do whatever they needed to do to protect artists from gun wielding fanatics. Sadly, that's not the case and another rising star had to pay the consequences with her life. SOMETHING NEEDS TO CHANGE!"

Dimebag was co-founder and lead guitarist for PANTERA. When PANTERA broke up in 2003, Dimebag and Vinnie Paul formed DAMAGEPLAN. On December 8, 2004, while performing with DAMAGEPLAN at the Alrosa Villa in Columbus, Ohio, Dimebag was shot and killed onstage by Nathan Gale. He was 38 years old.

Gale, an auto mechanic and ex-Marine, was described by some as an unstable man who once asserted that PANTERA had stolen his song lyrics and even his identity.

Fighting the lawsuit cost "in the hundreds of thousands of dollars," Rick Cautela, the club's owner, told The Columbus Dispatch. "We went from doing damn good to being broke — and came back."

In a 2014 interview with the "Talk Is Jericho" podcast, Vinnie spoke about his brother's passing. He said: "It was a really hardcore, tragic event, and the guy [Nathan Gale] wanted to kill me too. And somehow or another, I was lucky enough to escape that, and I'm still here, and I will do everything and anything I can to carry on the legacy and the tradition that my brother always had."