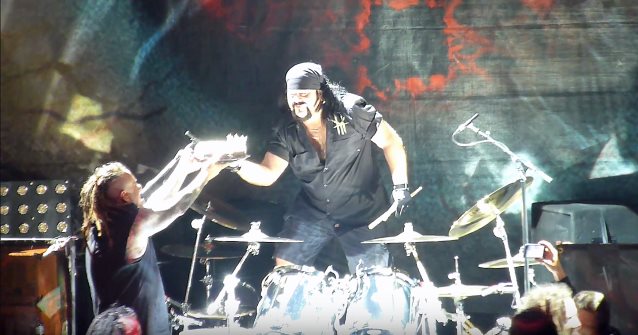 Former PANTERA and current HELLYEAH drummer Vinnie Paul Abbott celebrated his 53rd birthday on stage during the latter band's concert this past Saturday, March 11 at the Samsung Hall in Duebendorf (Zurich), Switzerland.

Prior to launching into the song "Startariot", HELLYEAH was joined on stage by three members of the headlining band KORN — bassist Reginald "Fieldy" Arvizu, guitarist Brian "Head" Welch and drummer Ray Luzier — who presented Vinnie Paul with a birthday cake. Fieldy handed the cake to the drummer, who proceeded to blow out the candles and take a bite of the cake before resuming the concert with his bandmates.

Vinnie Paul's long-awaited cookbook, tentatively titled "Drumming Up An Appetite With Vinnie Paul", is expected later this year. He told the Banana 101.5 radio station that the book will feature "a picture of me sitting behind the drum set. I'm holding two big, old turkey legs; those are otherwise known as drumsticks. And it's got a lot of really cool recipes that I came up with on my own; a lot of them my mom taught me when I was growing up; and just a lot of tongue-in-cheek humor, and it's just a lot of fun. It's not real serious."

Vinnie added: "A lot of people think cooking is throwing something in the microwave. It's really not. There's a passion to it. It's like playing music. If you love doing it, you really put everything you've got into it and want it to be special, and that's what we do."