Former PANTERA and current HELLYEAH drummer Vinnie Paul Abbott and his father, Jerry Abbott (see photo below), will join Sirius XM host Jose Mangin tonight (Friday, November 21) at 6:00 p.m. EST for an hour-long special dedicated to the life and music of "Dimebag" Darrell Lance Abbott. Having just released the new book "He Came To Rock" — which includes rare photos, stories, and the "DimeVision - Vol 1: That's The Fun I Have" DVD — Vinnie and Jerry will give Liquid Metal fans an exclusive audio glimpse of what Dime was all about… music and making everyone around him smile. In between conversations, you'll enjoy Vinnie- and Jerry-approved tracks from PANTERA, DAMAGEPLAN, REBEL MEETS REBEL, HELLYEAH and more!

"He Came To Rock" contains over 400 pictures of Dimebag along with a biography of his life written by authors Susan Doll and David Morrow ("Elvis, Forever In The Groove", "Marilyn Monroe: Her Life And Legend"). Also included are personal tributes from a number of metal's most prominent musicians, among them SLAYER's Kerry King, ANTHRAX's Scott Ian and OZZY OSBOURNE/BLACK LABEL SOCIETY's Zakk Wylde. The DVD portion of the package consists of the previously released "DimeVision - Vol 1: That's The Fun I Have", complete with never-before-seen bonus footage.

Photo of Vinnie Paul Abbott and his father, Jerry Abbott, below was taken by Scott Harrison of HarrisonPhotos.com on November 18, 2008 at the Hard Rock Café in Las Vegas, Nevada. 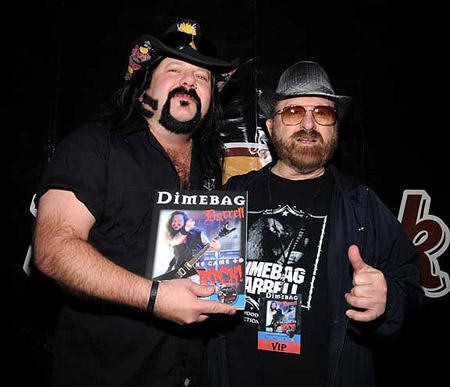