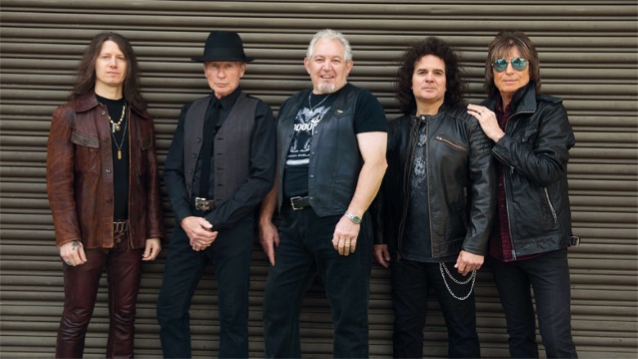 Back in May, UFO frontman and founding member Phil Mogg announced his plans to retire from the group.

The singer, who turned 70 in April, released a statement confirming that he will leave the band after UFO completes a farewell 50th-anniversary tour in 2019.

In a brand new interview with Rock Titan, Moore said that he is not entirely sure if UFO's last tour will continue beyond next year.

"From the way it's been told to me, [Phil] doesn't wanna call it a farewell tour — 'Last Orders', I think, was his official term," Vinnie said (see video below). "He basically wants to slow down. And when we got out next March, in 2019, that's basically the beginning of the end. Nobody knows how long it's gonna take to wind down. Maybe there'll be some shows in 2020. I don't know. I doubt it will be [five years] long, but maybe into 2020, you just never know. But the only thing concrete I've heard about at the moment is we're doing England next March and the fall probably America. So that's all I know about at this point."

Moore also talked about his decision to join UFO back in 2003, saying that he didn't have a lot of reservations about coming into the band as the replacement for UFO's best-know guitarist, German guitar wunderkind Michael Schenker. "I didn't think too much about it," he said. "I grew up a fan of the band — I had some of their records and I was totally into what they were doing — and so I felt like musically and stylistically, I would fit right in. And because they had had several guitar players in the band — somebody once told me that they've had, like, 17 different guitarists — so if there was only one guy, like Schenker or whatever, I think I would have been more apprehensive. But because a lot of people have been in the band… Just bring in another idiot; it doesn't matter where he's from — Delaware or Philadelphia; just bring him over. [Laughs]"

Saying that Schenker was "definitely" an early influence on his guitar playing, Vinnie was confident that his style would be a good fit with UFO's classic hard rock sound. "I was a fan when I was a kid," he explained. "And I remember learning a couple of his solos at guitar lessons — my teacher showed me some of his stuff. So, yeah, I was a big fan of the band and I was definitely a Schenker fan. So, yeah, it was, like, 'Wow!' Who would have ever thought that when I was, like, 16, 15 years old in my bedroom jamming with different records — Ritchie Blackmore's RAINBOW, UFO — that someday I would actually be in UFO; I never, ever would have dreamed that. This is totally surreal."

In his statement announcing UFO's final tour, Mogg said the decision was "a long time coming," adding that while "being out on the road isn't always tremendously luxurious and although the playing is as great as it ever was, the stuff that surrounds it becomes very tiresome. I always told myself that when I reached that stage, I would step down, and that's what I'm going to do. This is the right time for me to quit."