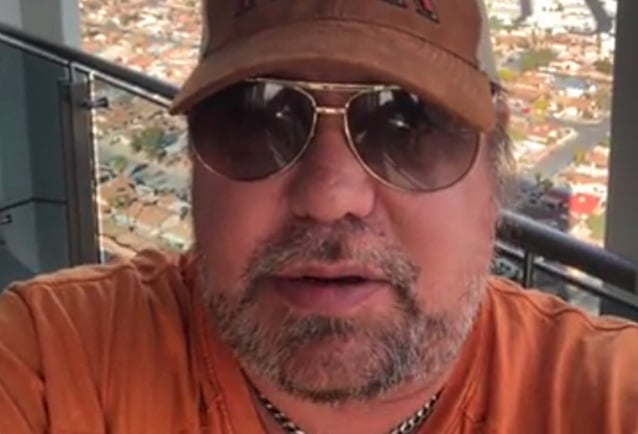 A video message from MÖTLEY CRÜE singer Vince Neil to a superfan has gone viral.

Neil was recently asked to send a birthday message on Cameo, which lets users hire celebrities to record brief, personalized video messages about virtually any topic. What he ended up recording is a 25-second video which sees him totally fumbling his instructed lines, including quoting "Dr. Feelgood" and other MÖTLEY CRÜE classics.

The clip in question was uploaded to YouTube by a user named "Skunk'd Life," who wrote in the accompanying description: "We hired Vince Neil of MÖTLEY CRÜE through a site called (www.cameo.com) to wish my younger brother a happy 40th birthday. I got my brother into the CRÜE when we were little and still to this day the CRÜE and esp Vince is his idol.

"You are given 250 characters of what you want the celebrity to say. and this is what we intended Vince to say:

'Happy Birthday to Derek from Christian, Mom, Tanya, Ethan and Blake. Shout at the devil to start off this new decade and take the opportunity to kickstart your auto search and sales!! Listen to the Dr. and feelgood about the big 4-0 in 2020.'

"This video is what came out of him instead. We honestly find it hysterical and Vince if you're seeing or reading this. We still love ya man!!! I'll see ya 10th row in miami this summer !!!"

The below video can also be seen on the Cameo web site.

Neil charges $400 for each of his Cameo videos.

Neil, along with the rest of MÖTLEY CRÜE, is preparing to hit the road this summer as part of "The Stadium Tour" with DEF LEPPARD, POISON and JOAN JETT & THE BLACKHEARTS. The trek will kick off on June 21 in San Antonio, Texas and will mark CRÜE's first live dates since wrapping its 2014/2015 farewell run. The band toured with POISON back in 2011 and DEF LEPPARD teamed up with POISON for a string of road dates in 2017 — but the upcoming jaunt marks the first time all four acts have hit the road together for an extended tour.