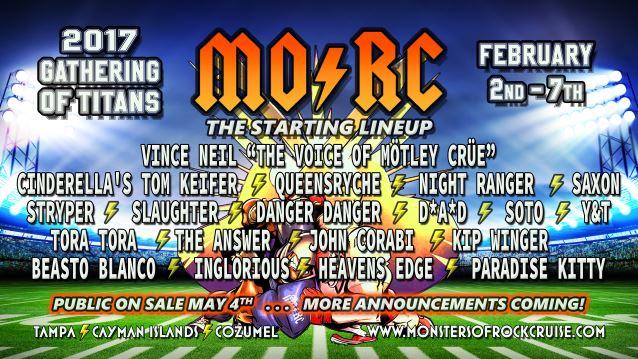 The 2017 Monsters Of Rock cruise, the seventh edition of the ultimate hard rock/heavy metal experience at sea, will set sail February 2-7, 2017 aboard a new ship and has expanded to six days, visiting two additional ports in the Caribbean for the first time.

Appropriately titled Gathering Of Titans, this year's five-night/six-day exclusive full ship charter cruise will set sail out of Tampa, Florida aboard Royal Caribbean's Brilliance Of The Seas, visiting Georgetown, Grand Cayman and Cozumel, Mexico and feature 15-plus artist performances, including headliner Vince Neil of MÖTLEY CRÜE, CINDERELLA's Tom Keifer, QUEENSRŸCHE, NIGHT RANGER, SAXON and STRYPER. As in past years, the cruise will also feature an optional pre-cruise party in Tampa on the evening of Wednesday, February 1 (details to be announced).

The cruise goes on sale today (Wednesday, March 4) with cabins starting at $1,099 per person (double occupancy), plus government fees, taxes, and gratuities.

Confirmed lineup for the 2017 Monsters Of Rock cruise:

In addition to the band performances, the cruise will feature over-the-top special events only experienced on this voyage, including: MOR Artist Photo Experiences, the first MOR Big Game Party hosting the live broadcast of the Monster Football Game on the pool deck big screen accompanied by a few musical surprises and activities, Monsters Rock & Roll Formal, exclusive MOR Craft Beer Tasting, Monster Gong Show Karaoke and Cooking with Rock Stars hosted by Lisa Tirone of Chef It Up!, with more events to be announced.

Royal Caribbean's Brilliance Of The Seas, combines acres of glass enclosing a nine-story central atrium, elevators facing the sea, and floor-to-ceiling windows throughout. Passengers can enjoy the tranquil Solarium pool, recharge at VitalitySM Spa, or reach new heights climbing Royal Caribbean's signature rock-climbing wall. When the sun goes down, the night heats up with epic Monster Performances on stages throughout the vessel. Combined with some of the best food and service afloat, this will be one of the greatest hard rock/heavy metal music extravaganzas ever produced.