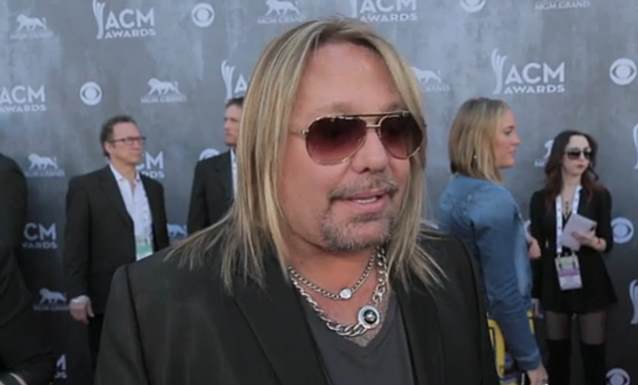 MÖTLEY CRÜE singer Vince Neil was interviewed by CBS.com at the 49th annual Academy of Country Music Awards, which was held on April 6 at the MGM Grand Garden Arena in Las Vegas, Nevada. You can now watch the chat below.

Big Machine Records, home to country superstars such as Taylor Swift and Tim McGraw has teamed up in a joint venture with Mötley Records and Eleven Seven Music for the summer 2014 release of a country music tribute to MÖTLEY CRÜE. Big Machine founder and CEO, Scott Borchetta, is among the legion of country music fans who love MÖTLEY CRÜE. The country tribute album will show off the band's quality songwriting with these fresh takes on their classic hit songs. Among the artists already confirmed to be featured on the country tribute album is Florida Georgia Line.