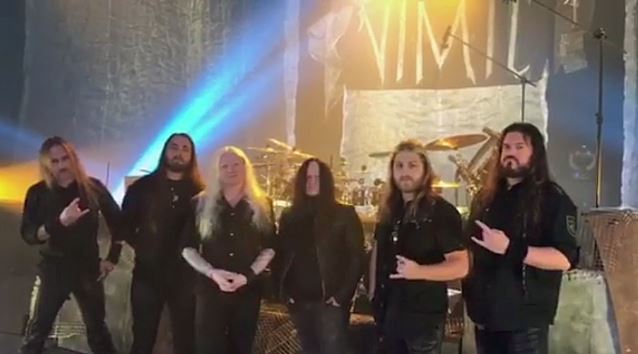 VIMIC consists of Jordison on drums, singer Kalen Chase Musmecci, who has toured with KORN as a backing vocalist and percussionist, and Joey's former SCAR THE MARTYR bandmates Jed Simon (guitar), Kyle Konkiel (bass) and Matthew Tarach (keyboards). VIMIC has signed a management deal with Nashville powerhouse CTK Management, where Jordison will reunite with former member of SLIPKNOT's original management team Danny Nozell, and will be represented by United Talent Agency's Neil Warnock internationally and Tim Borror in North America. Additionally, the band is readying the release of a new album for 2017, which will be released on Jordison's joint venture record label, with the first video and single to be released in December.

"It's an honor to be back working with one of the world's best drummers and songwriters," said Nozell. "Joey is a metal icon. I look forward to Joey touring globally and reconnecting with his fan base, helping share his new music and talents with the world again."

"I am very excited to be back in business with Joey," said Warnock, head of music worldwide at UTA. "I have fond memories of working with him during his time with SLIPKNOT, and am looking forward to making him a global success with VIMIC."

Said Jordison: "The band members have just arrived to my home in Des Moines, and the energy and vibe is absolutely magnetic. We are ready to bring back our music, showcase our new live shows to the masses, and show our appreciation to the fans who got us here and supported us in the first place. That's what matters, the fans!!! It's been a struggle, but we've overcome it and are ready to unleash. Thank you to all who have believed in us, have patiently waited, and continue to stand by our side. We'll see you soon! Get ready."

Jordison and VIMIC's first priority is getting in front of the fans, who have been sending letters, approaching Joey on the street and posting on social media asking when they will be able to see the iconic drummer live. Starting December 26 in Jordison's hometown of Des Moines, Iowa, the band kicks off a world tour. After the short U.S. run, VIMIC will embark on a European run that will kick off at the end of February through the month of March and into April with dates in London, Manchester, Birmingham, Paris, Berlin, Munich, Hamburg, Cologne, Barcelona, Madrid, Milan, Zurich, Tilburg, Copenhagen, Stockholm, Olso and more. VIMIC will also tour Asia, South America, and Australia in 2017.

SLIPKNOT announced in December 2013 that it had parted ways with Jordison. SLIPKNOT singer Corey Taylor told Metal Hammer that firing Jordison after 18 years was "one of the hardest decisions" the group ever made, adding that Jordison is "in a place in his life" which is "not where we are."

Taylor said that the band is "happy right now and we hope that he is… he's just in a place in his life, right now, that's not where we are."