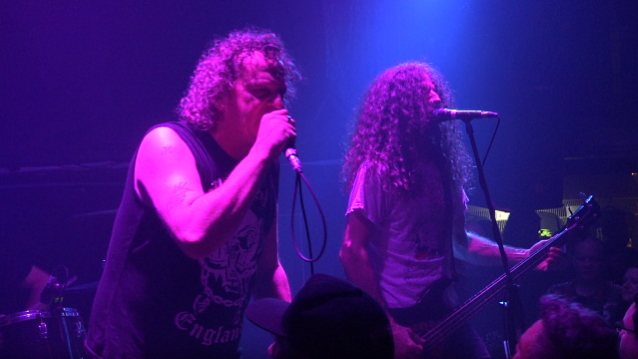 Video footage of VOIVOD's December 28 performance at Katacombes in Montreal, Quebec, Canada can be seen below. The legendary punk and metal venue, which is located in a distinctive black building on the corner of St-Laurent and Ontario in the Latin Quarter, will close at the end of 2019.

This past March, VOIVOD was honored with a Juno Award (the Canadian equivalent of the Grammy Award) in the "Metal/Hard Music Album Of The Year" category. VOIVOD won the award for its latest album, "The Wake", which was released in September 2018 via Century Media Records. The disc was recorded and mixed by Francis Perron at RadicArt Recording Studio in Canada. The album's artwork was once again created by VOIVOD drummer Michel "Away" Langevin.

Away told Sonic Perspectives about "The Wake": "This is one of the most intricate albums we've done, for sure. The songs are pretty long and complicated and lots of prog rock moments, a bit of psychedelia, of course, our punk/thrash metal signature is still there. So, it's vintage VOIVOD with a new twist with Rocky [Dominic Laroche, bass] and Chewy [Daniel Mongrain, guitar], there's sort of a futuristic touch to the band nowadays."

Asked whether "The Wake" is a collaborative VOIVOD album, Away said: "With VOIVOD, Chewy is the main writer. We do bring a lot of ideas, but it was basically the same when Piggy was in the band. He was the main writer. Sometimes, material will be pulled from improvisations we do at the rehearsal room where we record everything. So, Chewy had to rearrange the best parts into songs, but quite often, he'll come with riffs and songs mostly written and once in a while, I come up with a beat. Rocky brought a lot of riffs as well. It's collaborative at first, but Chewy is the guy to arrange everything."