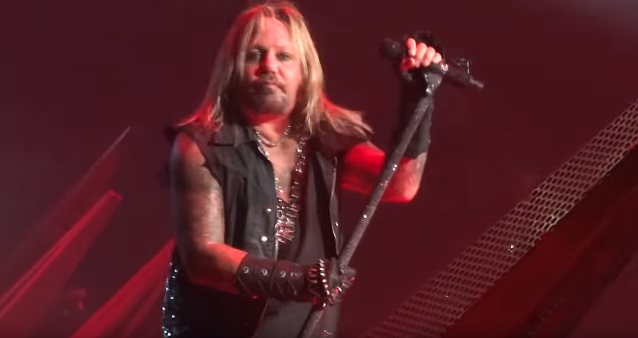 "We lost a true legend today, Lemmy from MOTÖRHEAD," Neil told the crowd. "I don't think he'd want a moment of silence. I think he'd want you to [put your hand] up in the air and say, 'Fuck yeah, Lemmy!' And then I think he'd wanna get down to the fucking music. What do you think?"

Fan-filmed video footage of Neil's Lemmy shoutout can be seen below.

As previously reported, memorial services for Lemmy have been scheduled for Saturday, January 9 from 2 p.m. to 2 a.m. at the Rainbow Bar And Grill in West Hollywood, California.

MOTÖRHEADwas revered by both metal and punk fans, and Lemmy was considered an icon for his musical talent and his embodiment of the rock n’ roll lifestyle.

The Rainbow Bar And Grill on L.A.'s Sunset Strip was known as Lemmy's hangout, making it an obvious place for friends and family to say goodbye to the legend.

Separately, some MOTÖRHEAD fans are outraged because Ticketmaster erroneously sent out an e-mail on New Year's Day offering them a chance to see the band perform live in June at a festival in the United Kingdom. The Download festival's ad reads: Make sure you don't miss Ozzy, Lemmy, Dave Mustaine and Bruce Dickinson when they return to the home of rock this June."

A spokesperson for Ticketmaster told the Daily Star: "We sincerely apologize for our e-mail advertising Lemmy at Download. It was sent in error. We can only say sorry for any upset we caused fans."