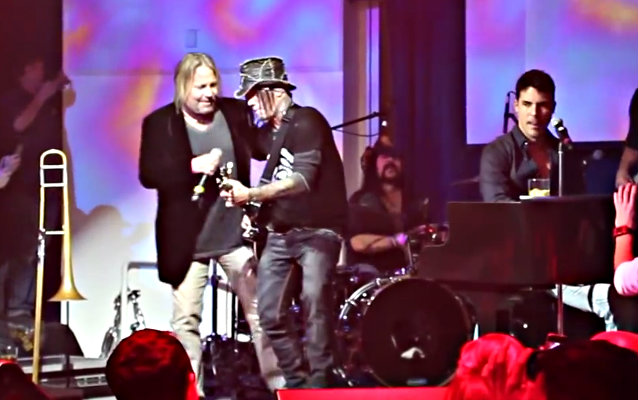 Las Vegas Weekly celebrated its 15th anniversary in true Las Vegas fashion with #Unscripted, a night that featured dozens of the city's elite, at the Havana Room inside The New Tropicana Las Vegas on December 18, 2013. A portion of the proceeds from the evening benefitted the Foundation To Assist Young Musicians and its mission to encourage young musicians through training, advanced study, career development and more. More than 650 of the publication's loyal fans gathered at the party, which commenced with signature spirits by Bacardi USA, sounds by producer and DJ duo MICS and a red carpet full of celebrities. Las Vegas Weekly publisher Travis Keys and Las Vegas Weekly editor Sarah Feldberg gave a few words to attendees followed by a "champagne wishes" toast from columnist and television personality Robin Leach. The evening was hosted by the editor at large and writer of entertainment column "The Kats Report", John Katsilometes, who also took the limelight to introduce some of the party’s key performances including the night's headliner, Frankie Moreno. Among the audience were several celebrities and Las Vegas personalities including publisher and editor of Las Vegas Sun, Brian Greenspun; television personality Holly Madison and founder and CEO of Insomniac, Pasquale Rotella; 'NSYNC band member and television personality Joey Fatone; PIN UP star and Playboy's 2011 Playmate Of The Year Claire Sinclair; Lacey Schwimmer of "Dancing With The Stars"; Chippendales members including television personalities Jaymes Vaughn and James Davis; MÖTLEY CRÜE lead singer Vince Neil; GUNS N' ROSES guitarist DJ Ashba; ROUGH CUTT/ex-QUIET RIOT singer Paul Shortino; and HELLYEAH/ex-PANTERA drummer Vinnie Paul Abbott. Guests had a blast as they mingled, sipped on drinks and enjoyed musical stylings, while Las Vegas' top performers hit the stage with absolutely no rules. At the center of the uncensored madness was Moreno's band, who invited the stars amongst the crowd to perform at random including Fatone, Neil, Ashba and Vnnie Paul. The artists performed hits ranging from '70s rock to holiday classics.

TropLV.com has uploaded video footage of Neil, Ashba and Vinnie Paul performing a cover version of the ZZ TOP classic "Tush"; and Ashba, Vinnie Paul and Shortino covering THE KINKS' "You Really Got Me". Check it out below.