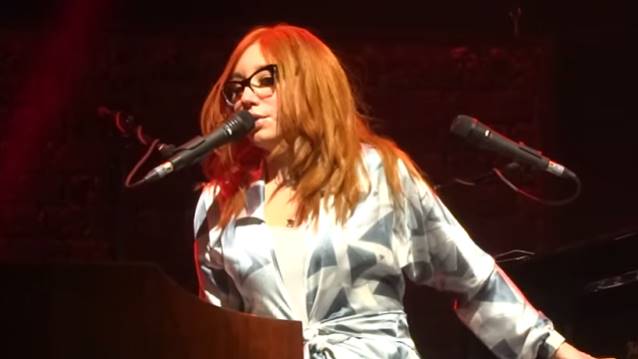 Eccentric singer, songwriter and pianist Tori Amos played a cover version of the METALLICA classic "Nothing Else Matters" on May 14 in Nottingham, England. Video footage of this rare performance can be seen at this location.

Amos made headlines in 2011 when she told Spinner.com that she wasn't surprised when she learned that wrestling superstar Mick Foley was a fan of her music, claiming that the emotion in her songs is more powerful than anything the heaviest of metal bands can churn out.

Amos said, "Sometimes you don't know how music affects people. I embrace that because I don't think that just because I talk about emotional stuff that it's not motherfucker stuff. I'll stand next to the hardest fucking heavy metal band on any stage in the world and take them down, alone, by myself. Gauntlet laid down, see who steps up. See who steps up!"

She continued, "I'll take them down at 48. And they know I will. Because emotion has power that the metal guys know is just you can't touch it. Insanity can't touch the soul. It's going to win every fucking time."

Amos covered SLAYER's classic song "Raining Blood" on her 2001 album "Strange Little Girls". SLAYER guitarist Kerry King later admitted that he thought the singer's version of the track was odd. "It took me a minute and a half to find a spot in the song where I knew where she was," he said. "It's so weird. If she had never told us, we would have never known. You could have played it for us and we'd have been like, 'What's that?' Like a minute and a half through I heard a line and was like, 'I know where she's at!'"

"Nothing Else Matters" was featured as a playable track in the music video game Guitar Hero: Metallica and has been covered over forty times by a host of different artists, including STAIND, Macy Gray, Shakira, Bif Naked, DIE KRUPPS, REV THEORY and APOCALYPTICA.