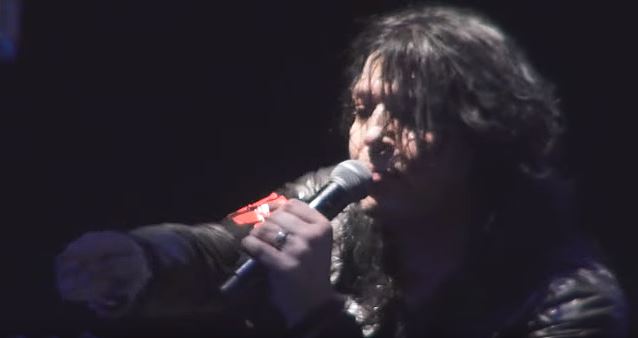 Fan-filmed video footage of CINDERELLA frontman Tom Keifer performing the band's classic songs "Don't Know What You Got (Till It's Gone)" and "Nobody's Fool" with his solo group — including his wife, Nashville singer-songwriter Savannah Snow — at the Magic City Casino in Miami, Florida on January 20 can be seen below.

Asked how writing solo material is different from composing music for CINDERELLA, Tom told RockNLive in a 2015 interview: "It's creating music. I write from the same place, whether it was with CINDERELLA or with this [Keifer's debut solo debut, 2013's 'The Way Life Goes']. I try to write from real-life experiences and emotions and things I've gone through or observed other people going through. And that's really the start of all of it. The songs are the foundation of everything. So I work very much in the same way in terms of the writing. And then, you get into the studio and the process is the same; you're trying to get out of the studio monitors what you heard in your head when you first got that song inspiration. So, yeah, it's very much the same."

Snow had an emergency appendectomy on September 20, 2015 after suffering abdominal pains prior to Tom's concert in Houston. Tom told Eddie Trunk during an appearance the next day on Trunk's SiriusXM satellite radio show, "Eddie Trunk Live": "It's crazy, man. We had a really, really bad scare. We were down touring through Texas and Oklahoma, and she started to feel very sick and have a lot of pain on [September 19]. By the time we got on the bus [after the Houston show that night], she looked so bad, I said, 'We're going straight to the emergency room when we get back to Nashville.' And sure enough, she had appendicitis. It had ruptured, and she went under emergency appendectomy. So really, really scary. She's doing better now, though. The surgery went well."

Savannah wrote and co-produced some of "The Way Life Goes", which sold 5,400 copies in the United States in its first week of release to land at position No. 78 on The Billboard 200 chart. The CD was released on in April 2013 via Merovee Records (through Warner Music Group's Independent Label Group).