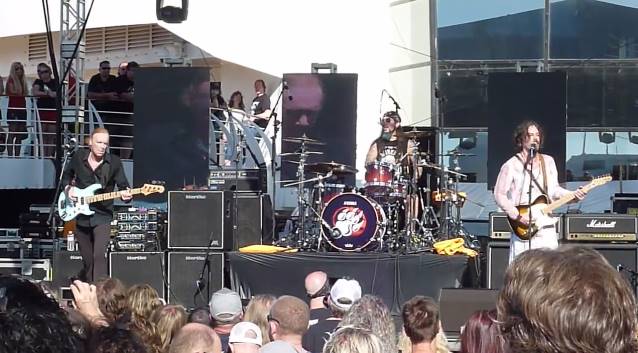 THE WINERY DOGS will release two new special versions of its self-titled debut album on April 15. "The Winery Dogs Special Edition" will consist of two-CDs. Disc 1 is the standard album and Disc 2 is entitled "Unleashed In Japan 2013", featuring 10 songs recorded live in Japan during the band's July 2013 tour, including "Criminal", a track previously unavailable in the U.S., along with a 16-page booklet of live photos and lyrics. A deluxe package for die-hard fans will be released simultaneously. "Dog Treats: The Winery Dogs Deluxe Special Edition" will be sold in a box resembling a box of dog treats, and will include the "Special Edition" collection of music, a DVD featuring four music videos and interview footage, demos from the original recording sessions, a "studio diary" written by Mike Portnoy, as well as some unique merchandise unavailable elsewhere.

THE WINERY DOGS' self-titled debut album sold around 10,200 copies in the United States in its first week of release to land at position No. 27 on The Billboard 200 chart. Released in North America on July 23, 2013 via Loud & Proud Records and in Japan on May 15, 2013 via Victor Entertainment, the CD was mixed by Jay Ruston, who has previously worked with ANTHRAX, ADRENALINE MOB, STONE SOUR and STEEL PANTHER.

"As soon as the three of us got together, we immediately established that we didn't want this to be some instrumental wankfest," Portnoy told NY Music Examiner in a new interview. "This was something that was going to be song-oriented and vocal-oriented, and something that moved us that way. I think that's where we're all at and we're all on the same page. Richie's been doing that for so long now, but Billy and I have always been associated with a million notes and technique and stuff like that. Yet the two of us are such fans of a good song and three-part vocal harmonies, so we were really looking to do something in that vein, and that was always the calling card for this band."

Regarding the reaction from the fans and press alike to THE WINERY DOGS' debut CD and live shows, Portnoy said: "All three of us could not be happier with the reception so far. It's been incredible. We went out for a lot of last year and toured all over the world, from South America to Japan to Europe to America, and everywhere we went it was so well-received. The fans have embraced it, and not only the fans, but the critics and all across the board. So it's so satisfying, especially at this point in all three of our careers. We've all been doing this for a long time now, but when you come together with something new, you kind of build it from scratch, no matter how established you are individually. And the fact that it's been so well received makes us want to continue to take this as far as we can."

He added: "I think the fact that all three of us have had our individual careers and individual acclaim kind of helps to keep the egos in check. It wasn't like a band where you had two guys that had done something and one was a newcomer. All of us had been around the block and have been doing this for 20-30 years now, so we had that mutual respect and we know what each person brings into the big picture.

"We've all been there, done that. We've played the Budokan multiple times and been around the world dozens of times, so at this point it's about the music. When the three of us came together, we didn't have this master plan of being the next GUNS N' ROSES; we had this master plan of getting together and making some music that the three of us enjoy. It was all about us seeing what the three of us could make together. If it gets us off, let's stick with it. That was always the goal, and so far we've achieved that goal. We made an album that all three of us are incredibly proud of and really enjoy listening to and playing."