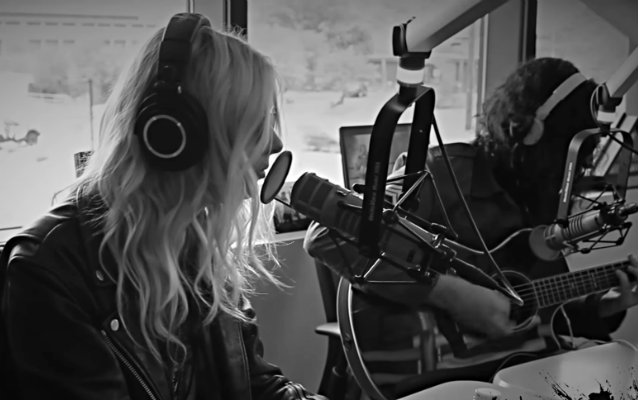 Video footage of THE PRETTY RECKLESS performing an acoustic version of the band's new single "Take Me Down" at the studios of the Arizona radio station 98 KUPD can be seen below. The track is taken from the group's third studio album, "Who You Selling For", which was released on October 21 via Razor & Tie.

"Take Me Down" recently landed No. 1 on the Rock Radio chart, marking the band's fourth consecutive No. 1 single. Frontwoman Taylor Momsen told Kerrang! magazine about the song: "It's a classic rock 'n' roll tune, which was inspired by the Robert Johnson story of going to the crossroads and selling his soul for rock 'n' roll — which I kind of did in one way. [Laughs] I gave my life to the music; I gave everything else up for it. And it's a simple story about giving your life to something you love so much and you need it so bad that you're willing to sell your soul for it."

Asked if "Who You Selling For" is autobiographical, Momsen told the Baltimore radio station 98 Rock: "Well, I think all of our records, in one sense, are autobiographical. I mean, I write them, so I'm writing about my experiences and my life and what I have observed and what I know. So I think this coming record is the next evolution of the band, so we're really excited for everyone to hear it. It's very diverse and eclectic, I guess is a good word to describe it. But, of course, it's personal. I mean, I write it."