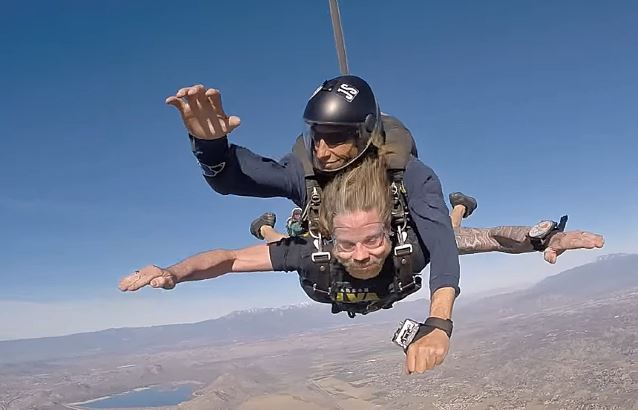 Skydive Perris has uploaded video footage of LAMB OF GOD and MEGADETH drummer Chris Adler's tandem skydive on February 12 with Mike Hoyt. Check out the clip below.

Adler recently spoke about how he is handling pulling double duty with MEGADETH and LAMB OF GOD. He said: "It's been a challenge, because now the MEGADETH record ['Dystopia'] is out, and everything is starting to gear up for MEGADETH, and Dave [Mustaine, MEGADETH mainman] would like me to be in [the band]. Of course, LAMB OF GOD is kind of my band… Well, it's all of our band; we're partners in that. So [LAMB OF GOD's latest] album ['VII: Sturm Und Drang'] is out, it's doing very well. We've got plenty of work touring the world, probably a couple of times, so it's gonna be difficult to juggle. But I'm gonna try very hard to do it. I feel very lucky to have the opportunity to be with both bands. It's kind of like having the best of both worlds."

Adler said in another interview that he wasn't particularly concerned about Mustaine's reputation as someone who is difficult to work with. "We [LAMB OF GOD and MEGADETH] had toured together in 2005; we did Gigantour together, and he and I have caught up and become… I wouldn't say friends, but, you know, acquaintances," he said. "And so, we would talk throughout the day and throughout the tour, and it was fun then. So, coming back into it, that really didn't scare me at all. And I've heard those stories too. I think people like to pick on Dave, because it's easy to pick on the king. This is the guy, for me, that created this whole thing, so it's always easy to pick on the guy at the top."