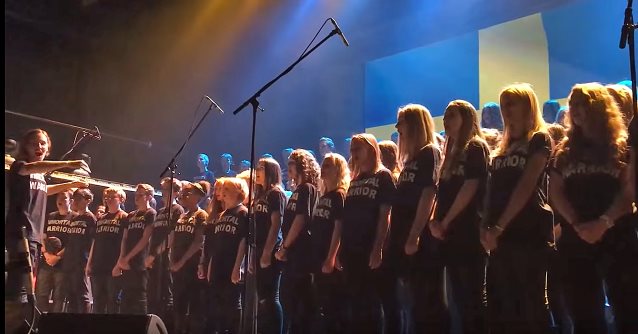 Video footage of Trollhättan's Hjortmosseskolan and Udevalla's Västerskolan youth choir performing at MANOWAR's "Gods And Kings" tour stop at the Nova Arena in Trollhättan, Sweden on February 5 can be seen below.

In a recent interview, MANOWAR bassist Joey DeMaio stated about the "Gods And Kings" world tour: "We've added tons of new equipment and power amps, for even more power than ever before. Most of our equipment is custom-made, so it is a really intense and time-consuming process getting everything done in time, and meeting our specifications. Those who saw our 2015 tour know that we worked with videos on our gigantic LED screens. We have flown in our video designer from Europe to work with us on new video elements that will be played during the songs and, of course, the LED screens will be bigger and of higher quality than ever — over 150 m² and 6k resolution to be precise. Nothing but the latest and best technology for our fans will do!"

Speaking about the tour concept, Joey DeMaio said: "The previous tour celebrated 'Kings Of Metal MMXIV'. It was a terrific experience for fans, band and crew. The production was big and featured elements that we had not done before. It was more of a multi-media experience, with videos linking the songs and their conception, telling the story of our fans and our lives, capturing the energy on stage and off… When we started planning the new tour, we soon agreed that we wanted to keep the best of this previous tour, but of course add on to it, make it different and even bigger. And, believe it or not, the 10-year anniversary of 'Gods Of War' is upon us: The album was released in 2007 but we started working on it in 2006. But more importantly the question was: Who should join our Kings in battle? The answer was: the Gods Of War! So this is how the 'Gods And Kings' concept was conceived. Naturally, the 'Gods And Kings World Tour 2016' [is] more massive than the 'Kings Of Metal MMXIV Word Tour'! The 2015 tour was big. But nothing compared to what you'll experience on the 2016 tour!"