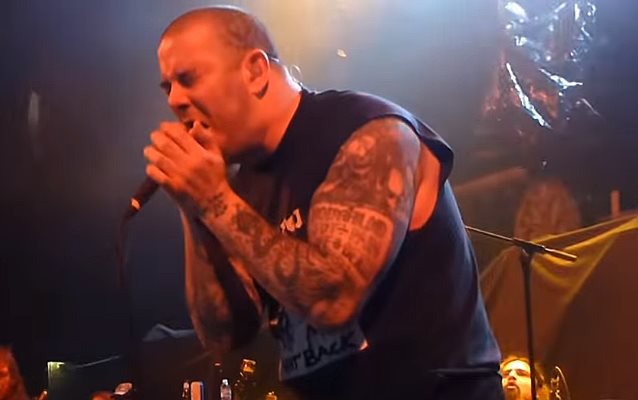 Fan-filmed video footage of SUPERJOINT's November 13 performance at the Aztec Theater in San Antonio, Texas as part of this year's Housecore Horror Film Festival can be seen below.

In a recent interview with the Phoenix New Times, Anselmo was asked why he feels that SUPERJOINT's current live shows are so much better than those that he played with the band more than a decade ago when the group was known as SUPERJOINT RITUAL. He responded: "So-briety! [Laughs] Simply put. Sobriety."

He continued: "You know, originally we were plugging along with SUPERJOINT, truth is, and I'm not a bit embarrassed or ashamed to admit it at all, I really don't remember much about SUPERJOINT from back then except for little pieces. I was fucked up out of my fucking mind on heavy drugs … and the overindulgence of booze. These days, don't get me wrong, I like my suds and I like a bit of the white grape…. But I think every damn one of us has a much clearer mind. A much more stable support system within that realm. And we're all veterans now, man. We've been through the lowest of times together, and this group of people — specifically, [guitarist] Jimmy Bower and [bassist] Kevin Bond — when it was time to say 'fuck this road to destruction,' we all kind of did that together. We all came off of heavy drugs at the same time. So I think there's this strength with knowledge there about what not to do. So really it just happened from our clear minds and fresh blood there. It's a positive thing. It feels like it's fun again, and isn't that the point? If you're going to make music and you're having fun while you're doing it, nothing in this world cane deter from that."

Anselmo also talked in more detail about SUPERJOINT's stage show. He said: "I would just say, as far as energy goes, we know from being in the scene for 20, 30 years that we don't have to get up there and jump around and dance around for the kids anymore. All we need to do is throw our amps and drums up on stage… And play the music as tight as possible with no bullshit, man. Just lay it on them. And during this [fall], we're also going to be doing a multitude of shows with the mighty Glenn Danzig, who I've been friends with, for, geez, 25 years. He's always been a complete gentleman and supporter of myself and what I do. You look at a set like that … our game plan is to rip it song after song after song, with nary a break. And we will always have interaction with the audience because I love that part as well. But it comes down to leading people with a positive impression and playing as many songs as possible."

According to Anselmo, the direction of SUPERJOINT's new material will be very similar to that one the band's first two albums, 2002's "Use Once And Destroy" and 2003's "A Lethal Dose Of American Hatred". "It won't sound any different, because myself, Jimmy and Kevin have always been the main writers in SUPERJOINT anyway, so, really — for the most part, really, me and Jimmy. So it shouldn't sound much different at all," he told Full Metal Jackie back in July.