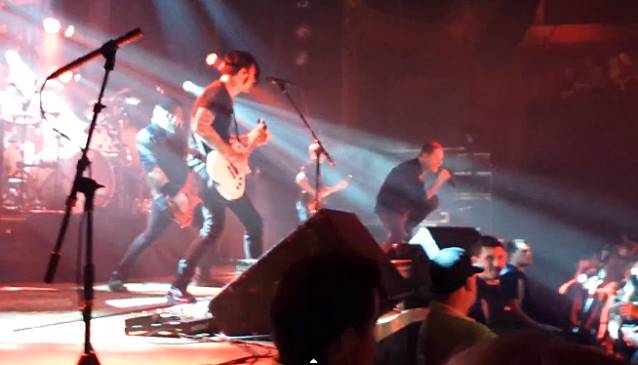 Fan-filmed video footage of STONE SOUR performing a cover version of METALLICA's "Creeping Death" on February 3 at the Ogden Theater in Denver, Colorado can be seen below.

As previously reported, STONE SOUR guitarist Jim Root has chosen to sit out the band's current North American tour so that he can concentrate on writing music for the next SLIPKNOT album. The Pulse Of Radio spoke with Root and asked him to explain his decision in a little more depth. "You know, unfortunately I'm only one person," he said. "I can't really be in two places at one time and the amount of focus that I need to put into SLIPKNOT makes it really difficult for me to be on tour with STONE SOUR. It's crushing and it's heartbreaking and I really don't like the idea of not being out there, but I don't really see any other way to really do it without — I mean, this is like the best way that we could come up with for a compromise."

Root is being replaced for the month-long tour, which began on January 14 in Lake Buena Vista, Florida, by Christian Martucci. POP EVIL and STOLEN BABIES are also on the bill.

The trek marks the end of the touring cycle for STONE SOUR and the band's two-album set, "House Of Gold And Bones".

SLIPKNOT's long-awaited fifth album will be its first since 2008's "All Hope Is Gone" and first since the 2010 death of bassist Paul Gray and this past December's dismissal of drummer Joey Jordison.