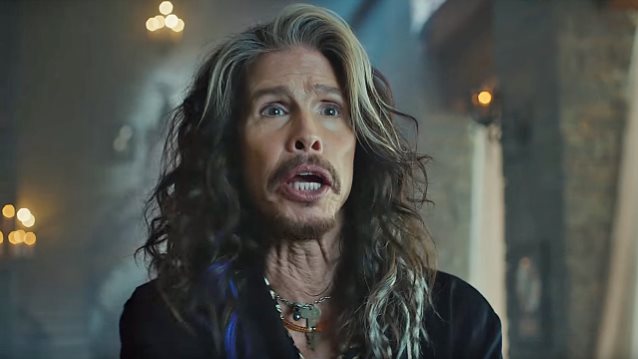 Steven Tyler is featured in a Super Bowl commercial for candy brand Skittles. The 30-second spot, which will air during the second quarter, was inspired by the apparent trend of Skittles fans making things (pictures, recipes, stop-motion films, etc.) out of the rainbow-colored candies. The ad, which can be seen below, shows Tyler checking out a portrait of himself made of Skittles — and he's not too happy about it.

According to a publicist for Skittles' parent company, Wrigley, "as a show of appreciation, the brand created a custom, one-of-a-kind Skittles covered microphone for Steven, so he can rock on with the rainbow leading up to the Super Bowl and beyond."

In May 2015, Tyler released his first country single, "Love Is Your Name", which reached #1 on the Billboard Country Streaming Songs chart.

Tyler's full-length country debut is tentatively due later this year. The singer will also perform alongside Nashville-based band LOVING MARY for two nights in March at the Niagara Fallsview Casino in Niagara Falls, Ontario, Canada.