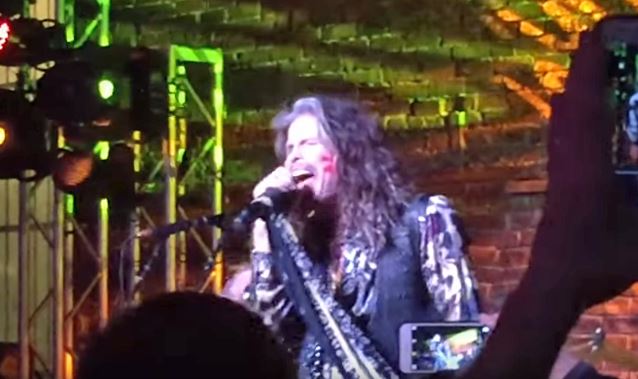 AEROSMITH singer Steven Tyler was one of the performers who took part in a concert Monday night (February 8) during the 2016 Country Radio Seminar in Nashville, Tennessee. Also appearing at Big Machine Label Group's show were A THOUSAND HORSES, THE CADILLAC THREE and Drake White.

Joined by his Nashville-based band LOVING MARY, Tyler sang his recently released country-flavored singles "Red, White & You" and "Love Is Your Name", along with select AEROSMITH classics like "Walk This Way" and "Cryin'". He also performed a cover of "Piece Of My Heart".

Released last month, "Red White & You" is a glorious illustration of how to weave the famous slide guitar and banjo-jangling sounds of country with the huge radio-friendly choruses that have been synonymous of Tyler's highly prolific musical career to date. Produced by Tyler himself, along with one of country music's finest session players Dann Huff (Michael Jackson, Taylor Swift, Celine Dion), the track was also co-written with Nathan Barlowe, Levi Hummon and Jon Vella.

In May 2015, Tyler released his first country single, "Love Is Your Name", which reached #1 on the Billboard Country Streaming Songs chart.

Tyler's full-length country debut is tentatively due later in the year. The singer will also perform alongside LOVING MARY for two nights in March at the Niagara Fallsview Casino in Niagara Falls, Ontario, Canada.

The "Love Is Your Name" clip was filmed just outside Nashville and was previewed on ABC's "Good Morning America" before it went live online. The track was written by Lindsey Lee and Eric Paslay.

Tyler spoke to ABC News Radio about his appreciation for modern country music. He said: "I think country music is the new rock 'n' roll. I mean, you can listen to the lyrics, you can really get into it, just as you could get into 'Stairway To Heaven'. Country's not just about porches, dogs and kicking my boots up. It's a whole lot more, but it's about being real. You know, the world's gone so far away from that. I hope it comes back."