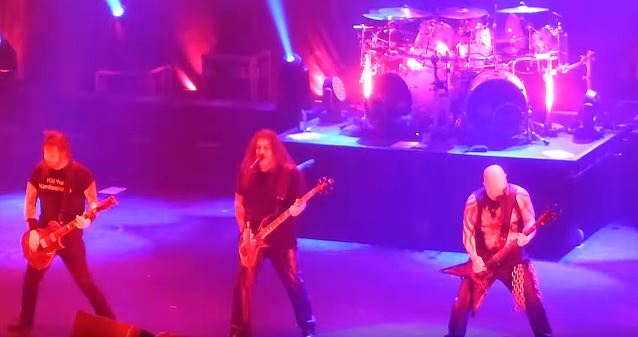 Fan-filmed video footage of SLAYER's November 24 performance at the O2 Apollo in Manchester, England can be seen below.

SLAYER's new album, "Repentless", was released on September 11 via Nuclear Blast. The follow-up to 2009's critically acclaimed, Grammy-nominated "World Painted Blood" was produced by Terry Date, who has previously worked with PANTERA, DEFTONES and SOUNDGARDEN. The artwork was created by Brazilian artist Marcelo Vasco in collaboration with the band's Tom Araya and Kerry King.

Asked what has been the most embarrassing thing that has happened to him while on stage or meeting a fan, King told OC Weekly: "The oddest thing that's ever happened to me was in Spain. We were playing small enough shows at the time where our bus was on the street and we weren't segregated from the fans. People would wait for autographs outside. In one particular city, the fans were really well behaved. They waited in line and we would just walk down and sign things. Half way down the line, this guy gestures for me to write with something, and it ended up being a scalpel. He wanted me to carve SLAYER or my name in him somewhere. I told him I would sign anything he had, but I wasn't going to cut him."

He continued: "The only thing I've really done on stage that wasn't planned was on the 'South Of Heaven' tour. Back then, but I used to be on [late SLAYER guitarist] Jeff's [Hanneman] side of the stage for the tradeoff lead in 'Angel Of Death'. During the double-bass kill, I would run back over to my side when the strobes were going. One time, I was running over to my side and the strobes didn't work; it was so dark that I ran into a light and went sliding on my back across stage. I tried to keep playing, but the tour manager at the time had to prop me up for the last 30 seconds of the song." 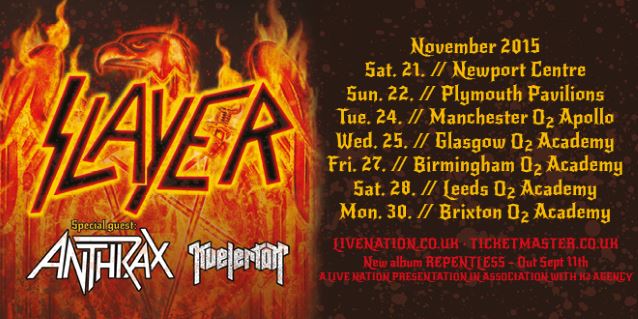