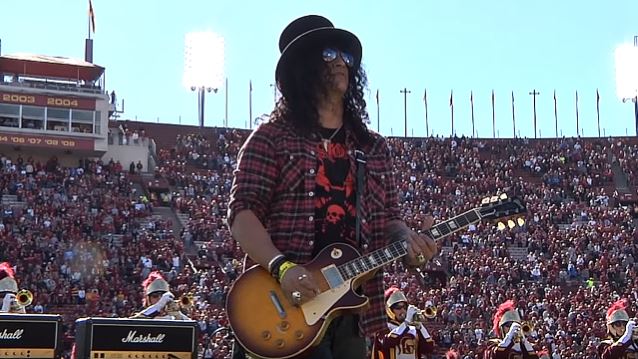 Legendary guitarist Slash (GUNS N' ROSES, VELVET REVOLVER) joined the University of Southern California marching in playing the national anthem prior to USC's football game against the University of California, Los Angeles (UCLA) on Saturday, November 28 at the Coliseum. Video footage of Slash's performance of "The Star-Spangled Banner" can be seen below.

As previously reported, a GUNS N' ROSES-themed slot machine is coming on January 21, 2016 from Swedish casino games developer NetEnt. You can choose several songs to listen to as you lose your money, including "Welcome To The Jungle", "Sweet Child O' Mine", "Paradise City" and "November Rain", as well as the title track of the band's last album, 2008's "Chinese Democracy".

Based on a video teaser released for the machine, it only features images of singer Axl Rose, Slash and bassist Duff McKagan — the only original members rumored to be taking place in a reunion tour next year.

Reports have surfaced recently that original members Izzy Stradlin and Steven Adler will not be participating.

Rumors about a reunion of the classic GUNS lineup have been heating up ever since the summer, when Slash revealed that he and Axl had repaired their relationship after nearly 20 years of estrangement.

Slash told The Pulse Of Radio a while back what he's most proud of when it comes to GUNS N' ROSES. "The most proud I am would have to be just the sense of accomplishment from getting from these sort of nomadic gutter rats that we definitely were, to manage to get from that point and make a record and go out and start touring and doing all that stuff and then to actually succeed, to have that record succeed, it was definitely an accomplishment that I'm very proud of," he said.

The current lineup of the band has not performed live since last year, although two guitarists recently left the fold.

Other celebrities and musicians with direct or indirect ties to the GUNS camp have also hinted that an announcement is imminent.