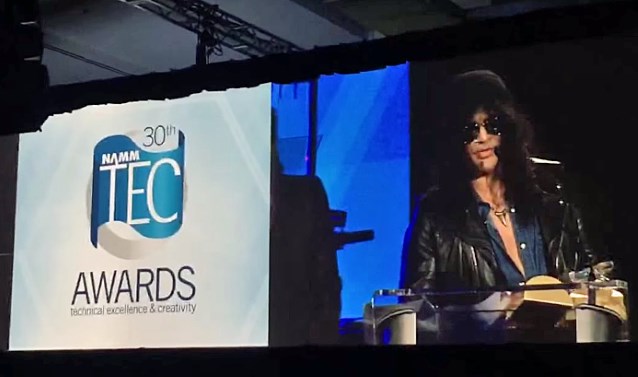 The Les Paul Award named for the revolutionary inventor and esteemed musician, honors individuals or institutions that have set the highest standards of excellence in the creative application of audio and music technology. Instituted in 1991, the honor has been granted to luminaries, including Pete Townshend, Paul McCartney, Brian Wilson, Stevie Wonder, Neil Young, Todd Rundgren and Peter Gabriel.

Video footage of Slash's acceptance speech and performance at the NAMM Technical Excellence & Creativity Awards can be seen below.

Slash now enjoys a thriving solo career with his new band SLASH FEATURING MYLES KENNEDY AND THE CONSPIRATORS. On September 16, 2014 the band unleashed their top ten new album, "World On Fire", to worldwide acclaim. The CD marks Slash's third straight album to debut in the Top Ten. The title track, "World On Fire", ascended to No. 1 at U.S. rock radio. "World On Fire" features Slash with Myles Kennedy (vocals), Brent Fitz (drums) and Todd Kerns (bass). The album was released on Slash's label Dik Hayd International, which is distributed through Caroline.

SLASH FEATURING MYLES KENNEDY AND THE CONSPIRATORS are on a world tour.

Slash supports efforts to revitalize music education programs in public schools, as an honorary board member of Little Kids Rock.