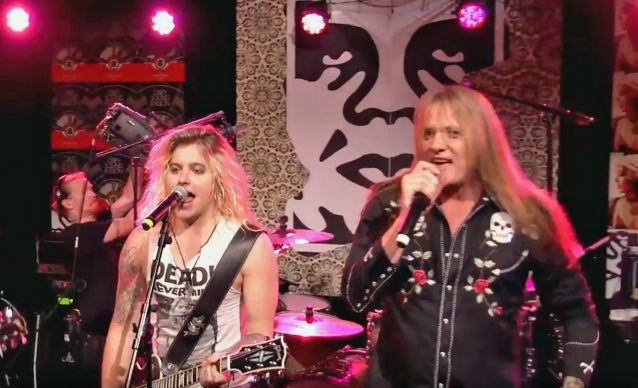 Video footage of former SKID ROW singer Sebastian Bach performing the TWISTED SISTER classic "I Wanna Rock" with Finnish rockers SANTA CRUZ can be seen below. The clip is taken from AXS TV's original music series "Breaking Band", which premiered in January. The documentary-style series was hosted by ROYAL MACHINES vocalist Donovan Leitch and featured six 30-minute episodes packed with powerhouse performances and appearances from some of the industry's biggest names.

"Breaking Band" gave some of the country's most talented emerging musicians the chance to achieve their dreams of rock stardom. Throughout the season, the artists were guided by an eclectic array of famous faces, serving as mentors and collaborators for the young musicians. This season's mentors were Bach, rocker and TV personality Mark McGrath (SUGAR RAY); chart-topping music artist Belinda Carlisle (THE GO-GO'S); rock legend Robin Zander (CHEAP TRICK); award-winning producer and techno star Moby; and beloved guitar guru Dave Navarro (JANE'S ADDICTION). As mentors, they shared their invaluable advice from their decades of experience while supporting the emerging artists in their debut live broadcast performance.

"Breaking Band" was filmed at YouTube Space LA, and concert highlights are available on youtube.com/axstvconcerts.

SANTA CRUZ will return to American soil this April and May, partying hard, and rocking the hell out as the main support act on Bach's upcoming tour. The trek kicks off on April 27 in Jacksonville, Florida and runs through June.