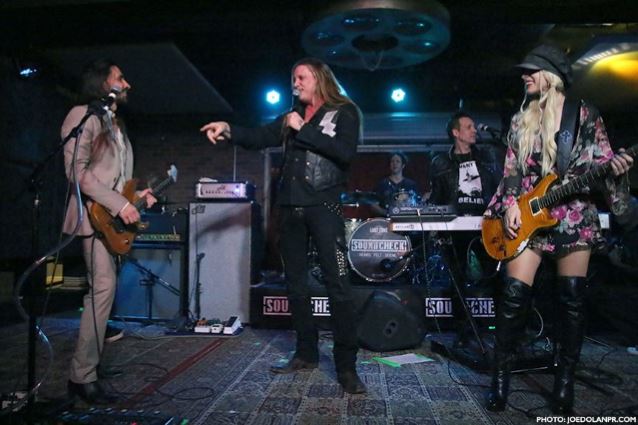 Lucky Strike Live in Los Angeles, California has become a hotspot for music fans over the past year with random onstage performances by popular artists in the rock genre. Fans have clamored for a spot in front of the stage to witness one-of-a-kind performances by artists they might otherwise pay inflated ticket prices to see in a venue that seats thousands and thousands of patrons.

The opening night of "Soundcheck Live" this past Wednesday, March 16 brought out the stars and fans in droves to be part of the action. Opening the show was comedian and former "Howard Stern Show" cast member Chris Gass. Gass spent five minutes warming the crowd with impressions and stories of his interactions with Gene Simmons and his time spent on "The Howard Stern Show". Cameras raised and the curtain drew back to cheers as Ferlazzo and the resident band pulled out classic and fan favorite chart toppers played in a modern rock fashion.

The show consisted of three sets of music. The first set brought out former Michael Jackson and Alice Cooper guitarist Orianthi along with the Highland Horns brass section and back-up singers, including Lisa Foreman, someone who has been on stage at Lucky Strike over the past year. Set one included the band's own versions of INXS' "New Sensation", TEARS FOR FEARS' "Sowing The Seeds Of Love", James Brown's "Papa's Got A Brand New Bag" and Orianthi performing "Pride And Joy" and "Voodoo Chile", among the set of nearly a dozen songs.

Set two was designed as a feature with Nuno Bettencourt (EXTREME) as the guest curator, assembling a unique set of songs to highlight the skills and styles of the artists on stage. It also brought out former SKID ROW vocalist Sebastian Bach. Sharing laughs on stage with Bettencourt, Bach interacted with the crowd and performed David Bowie's top-selling single "Fame" and unique covers of "Next To You" and "School's Out". The set was rounded out with the inclusion of artists Francesco DiCosmo on bass and vocals, guitarist Doug Aldrich (WHITESNAKE, DIO), drummer Brian Tichy (WHITESNAKE), bassist Rudy Sarzo (OZZY OSBOURNE, QUIET RIOT) and frontman Chas West trading places to perform songs by RUSH, WHITESNAKE and LED ZEPPELIN.

As if that wasn't all a concert could deliver, the resident band returned with more guests for a complete third set, showcasing songs by THE KNACK, AEROSMITH, KANSAS, U2 and culminated with Bruce Springsteen's "Born To Run".

Scheduled for regular shows on Wednesday nights at Lucky Strike, "Soundcheck Live" will continue to be free to participants and will offer new guests, new and different setlists and rare opportunities for music fans to get up close and personal with the musicians they love in an atmosphere that embraces the rock and roll community in Southern California.

Photos and report courtesy of JoeDolanPR.com 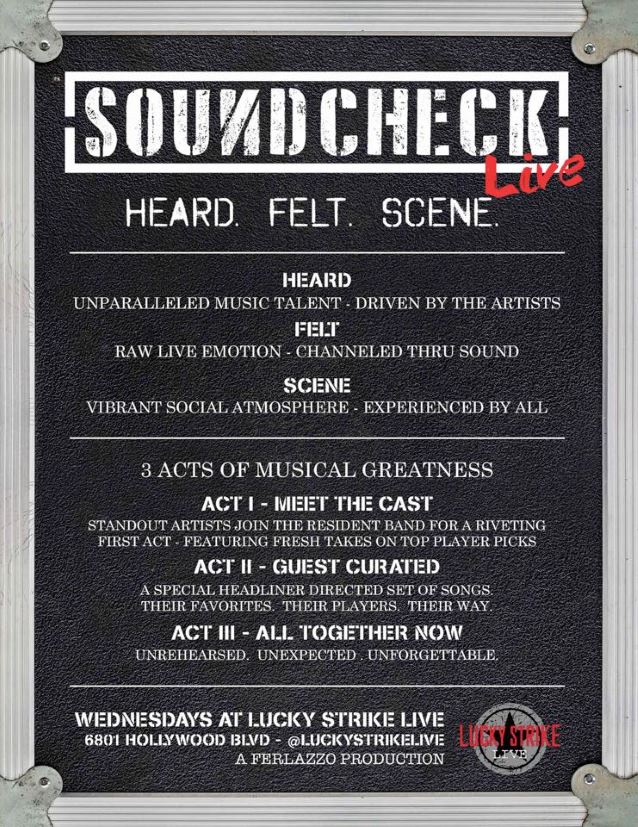