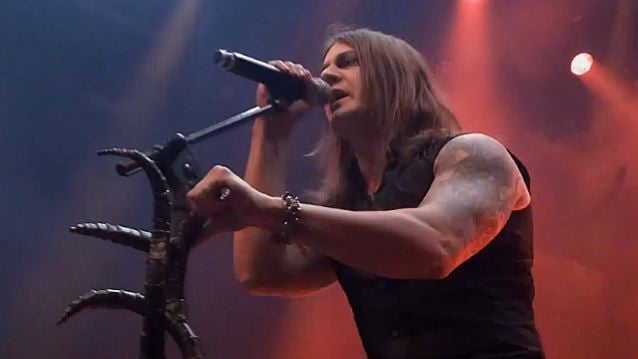 Norwegian black metallers SATYRICON kicked off their "The Dawn Of A New Age" European tour on April 4 at Doornroosje in Nijmegen, The Netherlands. Fan-filmed video footage of the concert can be seen below.

SATYRICON has signed a worldwide deal with Austrian label Napalm Records for release of its upcoming DVD, "Live At The Opera".

To coincide with the release of its self-titled, eighth studio album, SATYRICON played a very special, exclusive show on September 8, 2013 at at Den Norske Opera & Ballett in Oslo, Norway, where they were joined by the 55-strong Norwegian National Opera Chorus as part of the Ultima Oslo Contemporary Music Festival.

The performance was professionally filmed and recorded and will be released as the "Live At The Opera" CD/DVD on May 1 in Europe and May 5 in North America.

Commented SATYRICON frontman Sigurd "Satyr" Wongraven about the story behind "Live At The Opera": "The whole thing started with us doing one song, 'To The Mountains', a year and a half before the actual show. We performed at a closed event in the main hall of the opera with the Royal Norwegian Opera Chorus. It was very inspirational. I then said to the conductor that I would love to do a whole show like this. He loved the idea, I was serious about it, and he was serious about it.

"We spent approximately one and a half year working with composer and arranger Kjetil Bjerkestrand on the choral arrangements.

"When I picked songs, I was not necessarily looking at only songs suitable for choral arrangements or typical in the SATYRICON live set. For me, it had to be a combination.

"If you look at songs like 'Die By My Hand', it's pretty obvious we'll want to use a choir for that because it has a choir on the record too. On the other hand, there were other things I had to consider. For example, 'K.I.N.G.' is probably the most famous SATYRICON song ever — and not necessarily a song I can imagine with choral arrangements. But just because people hear it more or less the same way always, I thought it would be interesting to take that song and give it a totally different vibe for this one time. And it's also interesting to see if we can work it around the structure of a song that is more or less straightforward.

"For something that we planned for so long, put so much work into, and something this unique — of course it would be nice to film it and record it. But I made it very clear to the people around SATYRICON that I'm not going to turn this into a recording session where you can buy tickets.

"When you hear or or watch this recording, you should feel like you're there.

"This is not SATYRICON - 'Best Of From The Opera', this is a show! The perfect parts need to go in there, but also the parts that are not so perfect. That's the nature of it, that's the real deal.

"It's not a live album. It's a celebration of what SATYRICON stands for as a band."

"Live At The Opera" will contain the full performance DVD and double CD of this exclusive and very special concert.

SATYRICON self-titled studio album was released in September 2013 in Norway via Indie Recordings, and in the rest of Europe through Roadrunner Records. The CD, which was made available in North America via Nuclear Blast Entertainment, was produced by Sigurd "Satyr" Wongraven and was recorded in Norway, and mixed by Adam Kasper. The effort features a guest appearance by Sivert Høyem, the Norwegian singer best known as the vocalist of the rock band MADRUGADA.