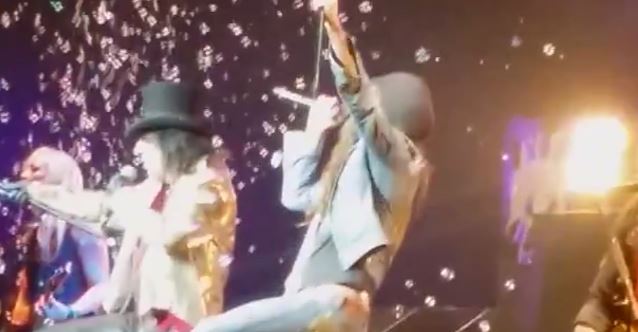 Rob Zombie joined Alice Cooper on stage during the legendary rocker's October 26 performance at Mohegan Sun Arena in Uncasville, Connecticut to perform the Cooper classic "School's Out". Fan-filmed video footage of Zombie's appearance can be seen below.

Asked what it was like touring with Alice Cooper, Zombie told Fanpass: "I have known Alice for about 20 years. Doing a tour with Alice was one of the best tours. 'Cause usually, you're on tour with people and they might be your friends, but maybe… they're just your buddies, but musically, you're not compatible. That was the first time I remember being on tour and it felt like what I thought touring should be. In your mind as a kid in the '70s, like, 'This is what touring should be.' But the best moment of that whole thing was, one night we were playing and Alice was watching the show from the side of the stage, and the lights were dark enough and on him, he was just wearing his leather jacket and he had his shirt on, and he was drinking a Coke which looked like a beer, and it looked like a 20-year-old Alice Cooper watching us, and it was fucking weird, man. Even, like, with the guys in his band. We've done stuff. We did the Scream Awards once and they showed a tribute to Alice, or like at the Rock And Roll Hall Of Fame. I get so used to knowing the Alice as he is now that I forget when I watch clips when he's really young. I'm, like, 'Fuck, it's the same guy.' I forget sometimes, just because it's separated in your mind."

Cooper was inducted into the Rock And Roll Hall Of Fame in March 2011 at New York City's Waldorf Astoria. He was inducted by Zombie, who said during his introduction, "Alice Cooper invented the rock show. Before Alice Cooper, there was no rock show. They're more than a band. They were more like a murderous gang of drag queens — in a good way."