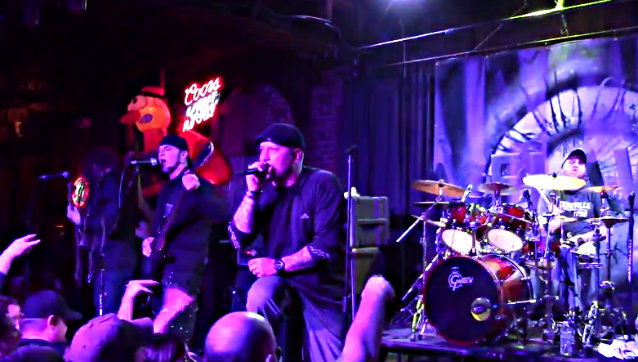 The original lineup of FLAW returned to the stage as headliners of WTFX 93.1 The Fox's annual Gobblestock on November 28 in Louisville, Kentucky. Check out fan-filmed video footage of the concert below (footage shot by Mean Bob Ray).

On the reformation, Daunt offered: "After several years apart to work out personal issues, we have reunited. The time apart has given us clear heads and a new appreciation for the music we are capable of creating together.

"We are currently writing new material, which is a modern throwback to our original FLAW material.

Added Volz: "We are stoked about our renewed musical relationship and can't wait to share it with the world.

"I am extremely excited and recharged to have the original lineup back in FLAW.

"I've conquered many demons and am ready to share my strength and hard fought battles with the world. We're back!!"

FLAW formed in 1995 with a core of Chris Volz (vocals) and Jason Daunt (guitar). The lineup was solidified in 1996 with the additions of Ryan Jurhs (bass), Lance Arny (guitar) and Chris Ballinger (drums). They released the independent albums "American Arrogance" (1996), "Flaw" (1998) and "Drama" (2000). At the turn of the millennium, FLAW signed with Universal Republic Records, and released "Through The Eyes" in 2001. The offering topped the Billboard Heatseekers chart, largely fueled by the singles "Payback" and "Whole". The band released "Endangered Species" via Republic in 2004, but soon thereafter the band went through personnel changes and ended their relationship with the label. Years have passed, with various incarnations, rumors, and misinformation permeating the band's legacy, but in late October, the band's official web site went live once again after eight years of inactivity.