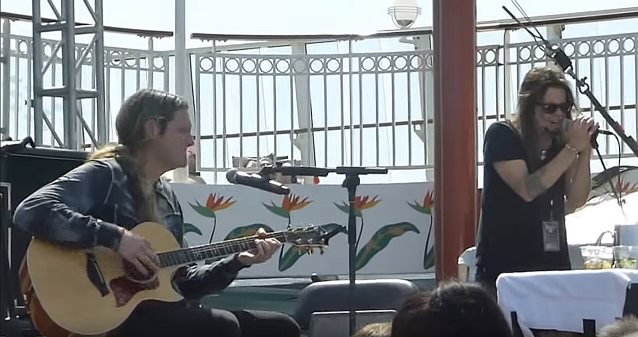 Fan-filmed video footage of QUEENSRŸCHE singer Todd La Torre and WHITESNAKE guitarist Joel Hoekstra performing an acoustic cover version of the WHITESNAKE classic "Love Ain't No Stranger" during this year's Monsters Of Rock cruise — the four-day, four-night voyage which set sail from Miami, Florida on February 22 and returned on February 26 — can be seen below.

Hoekstra joined WHITESNAKE in 2014 following the departure of Doug Aldrich. WHITESNAKE mainman David Coverdale stated at the time: "Joel came with six shiny stars of approval in every aspect of his life, but Jesus Christ, what a player! We pretty much… He was the only guy… We didn't audition him. We just threw him in, we jammed [together] and [told him], 'You want it? You're in.' It was that simple. We just had to keep it quiet out of respect for his colleagues in his former band [NIGHT RANGER], and I respected that 'till the point where it was just starting to get out, and I said, 'You know, you want some front page on this, J., we've gotta pull the trigger.'"