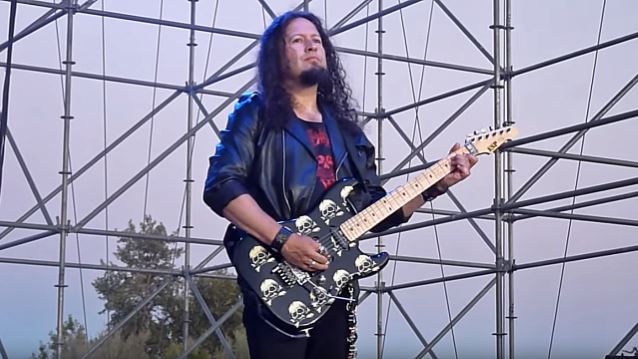 Fan-filmed video footage of QUEENSRŸCHE's July 21 performance at the Jackson County Fair in Central Point, Oregon can be seen below.

QUEENSRŸCHE will embark on a month-long headlining tour of the United States in November. Support on the trek will come from ARMORED SAINT and MIDNIGHT ETERNAL.

QUEENSRŸCHE guitarist Michael Wilton recently spoke to the "Music Mania" podcast about the role La Torre has played in rebuilding the band's classic sound and reconnecting with some of the early QUEENSRŸCHE fans who didn't care for the last few albums that the band recorded with Tate. "Well, obviously, it's critical," he said. "I mean, just how [the pairing with Todd] happened, I guess, it's fate. But thrust into that position, it's not an easy deal, and he's a trooper for doing it. He has the musical ability and he has the songwriting frenzy that we need. And we're touring a lot and everything, so it's been a good gelling, growing process for Todd. It's not easy when you've got such hardcore fans, but he's won the fans the over, he's won so many people over, and it's so great to see all the great crowds that are coming to see QUEENSRŸCHE now with Todd. The energy's back, the band's playing great, and he's a great frontman. He's the guy that's given everybody in the band a good shot in the arm of adrenaline. And we're having fun playing all over the world. He's definitely at home. And we get so many compliments of, like, 'You couldn't have found a more perfect person to replace your old singer,' and it's just like that every show that we go to; people are just so into Todd."

QUEENSRŸCHE will enter the studio in January 2017 to begin workon the follow-up to "Condition Hüman".