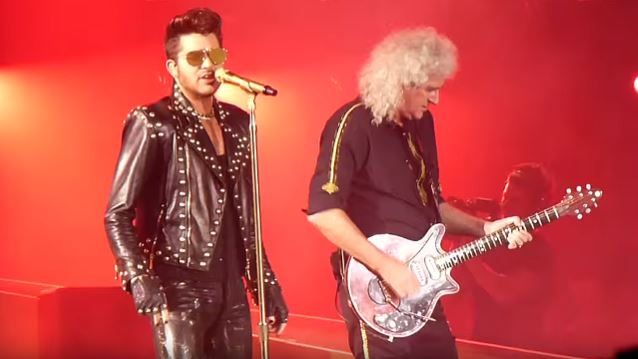 Video footage of QUEEN and "American Idol" finalist Adam Lambert performing on September 27 at Orfeo Superdomo in Córdoba, Argentina can be seen below.

On September 10, QUEEN members Brian May and Roger Taylor, along with Lambert — who has been singing for QUEEN on their tours, filling in for his idol Freddie Mercury — took part in a press conference ahead of their Rock In Rio performance in Rio De Janeiro, Brazil.

Speaking about the similarities and differences between Mercury and Lambert, May said: "Well, there are differences, you know, but I think perhaps the greatest thing about Freddie is his connection with people, with an audience, and Adam has that. And I don't think that's something you can learn; I think it's something which you either perhaps have in you or not. You have to dedicate yourself, and Adam, like Freddie, is dedicated to his art. But without that — whatever that wonderful talent is — I don't think it would happen. When Adam walks onto a stage, it's not Freddie, and it's not him trying to be Freddie, but when Adam walks on and when Freddie walks on, something happens; there's some kind of catalytic action that happens between people, and it's a very rare and special thing. So I would say that's something that Adam and Freddie share, and I know that Freddie would agree with that. I mean, without even speaking about the voice. I mean, the voice… they both had, and have, incredible voices — the kind of voice that you don't find in a billion people. And, of course, the voice is very special, but it's not enough. You have to have the will and the spirit to use that wonderful instrument that you've been given to make that connection."

Lambert, May and Taylor first shared the stage during "American Idol" in May 2009 for a performance of "We Are The Champions". They teamed up again in 2011 at the MTV European Music Awards in Belfast, Ireland for an electrifying eight-minute finale of "The Show Must Go On", "We Will Rock You" and "We Are The Champions" and in the summer of 2012, Lambert performed a series of shows with QUEEN across Europe as well as dates in Russia, Ukraine and Poland. They also performed three sold-out gigs at London's Hammersmith Apollo.

After completing QUEEN's most recent European tour in January, May described Lambert as the only singer the band had found capable of filling Mercury's shoes. "Adam is the first person we've encountered who can do all the QUEEN catalogue without blinking," said May. "He is a gift from God."