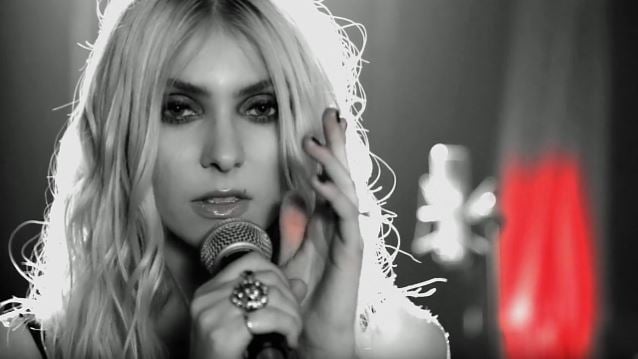 THE PRETTY RECKLESS's music video for the band's scorching single "Take Me Down" can be seen below. The track, which recently landed No. 1 on the Rock Radio chart, marking the band's fourth consecutive No. 1 single, is the first single from THE PRETTY RECKLESS's highly anticipated third studio album, "Who You Selling For", due out October 21 on Razor & Tie.

The "Take Me Down" video, shot by Meiert Avis, sees frontwoman Taylor Momsen and the band at Water Music Studios in Hoboken, New Jersey, where the album was recorded. Avis has directed videos for artists such as Bob Dylan, Iggy Pop, U2 and Avril Lavigne, among many others throughout his illustrious career, spanning over four decades.

The video, shot in black and white with subtle glimpses of red, shows Momsen in top form with her voice as powerful as ever. The '60s-tinged rock guitar and Taylor's soulful, smoky delivery makes "Take Me Down" a complete, blistering track that further cements the band at the forefront of rock.

Asked if "Who You Selling For" is autobiographical, Momsen told the Baltimore radio station 98 Rock: "Well, I think all of our records, in one sense, are autobiographical. I mean, I write them, so I'm writing about my experiences and my life and what I have observed and what I know. So I think this coming record is the next evolution of the band, so we're really excited for everyone to hear it. It's very diverse and eclectic, I guess is a good word to describe it. But, of course, it's personal. I mean, I write it."

Regarding whether there are any topics that are "off limits" during the songwriting process, Taylor said: "No. If you limit yourself, you immediately are stunting yourself. You can't limit yourself when it comes to writing. There's nothing that you don't explore."

Momsen recently told Kerrang! magazine about "Take Me Down": "It's a classic rock 'n' roll tune, which was inspired by the Robert Johnson story of going to the crossroads and selling his soul for rock 'n' roll — which I kind of did in one way. [Laughs] I gave my life to the music; I gave everything else up for it. And it's a simple story about giving your life to something you love so much and you need it so bad that you're willing to sell your soul for it."

THE PRETTY RECKLESS will hit the road this fall in support of the album, beginning October 20, playing major markets in the U.S. before wrapping up on December 6 in Los Angeles.