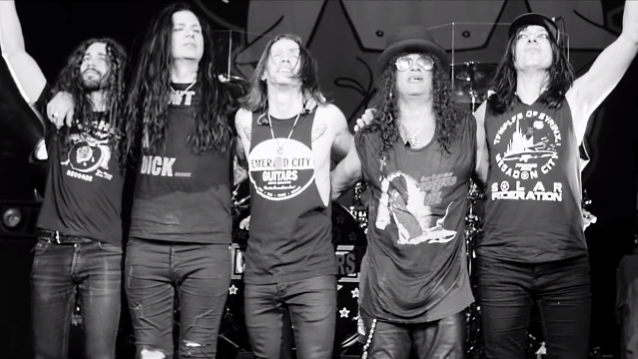 SLASH FEATURING MYLES KENNEDY AND THE CONSPIRATORS have released an official live video for "Boulevard Of Broken Hearts", recorded at the band's sold-out live performance at The Eventim Apollo in London on February 20. The stunning clip features the album version of the song overlaid with intimate backstage footage and live footage from the Eventim Apollo and shows why the band is such an incendiary live draw.

The video, shot and edited by Dan Sturgess, acts as the perfect precursor to SLASH FEATURING MYLES KENNEDY AND THE CONSPIRATORS' remaining tour dates throughout 2019. May and June sees Slash tour South America, before returning to Europe though June and July. The band then plays Israel, Canada and the U.S. through July and August.

"Boulevard Of Broken Hearts" is taken from Slash's latest album, "Living The Dream", which was released in September via his own label Snakepit Records, in partnership with Roadrunner Records.

Slash stated about "Boulevard Of Broken Hearts": "This might have been the last thing I came up with and brought to the band. It was another idea I had where I wasn't sure the other guys were going to get where I was coming from. But the chorus was done in such a way that I'd knew they'd get that part of it, and from there all we'd have to do is figure out the verses and the other sections. It actually came together really quickly, and after Myles heard it he had a vocal melody almost instantaneously."

Added Myles: "It's a newer one, for sure. Lyrically, it's about having this awareness that you're really close to obtaining your goals, as well as beating the odds. I thought about it from the perspective of a young musician striving for something, only the doors keep closing on him. But he's already come so far. So, it's a reminder to stay on course because you're almost there. It seemed like a good idea to end the record on. Keep pushing through and persevering, and eventually what you're shooting for will happen."