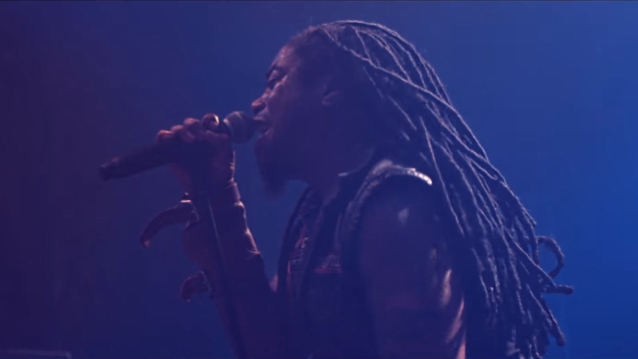 SEVENDUST has released a music video for the next single from its 12th studio album, "All I See Is War". "Risen" is a live performance montage clip for the latest single that is impacting Active Rock radio. The video was filmed during the band's recent show in London at the Brixton Academy. Dan Sturge, known for his work with ALTER BRIDGE, directed the clip.

"All I See Is War" came out in May 2018. The follow-up to 2015's "Kill The Flaw" was recorded at Studio Barbarosa in Gotha, Florida with producer Michael "Elvis" Baskette, who has previously worked with ALTER BRIDGE and SLASH, among others.

SEVENDUST's new disc is the group's first for Rise Records, the Oregon-based metal and hard rock label which was purchased by BMG in 2015.

SEVENDUST recently wrapped a successful tour of the United Kingdom and closed out 2018 with three hometown shows in Atlanta at The Masquerade. The New Year's Eve show was broadcast live via SiriusXM and the band performed its sophomore release, "Home", in its entirety, another career first for the band.

SEVENDUST will head to the high seas on this year's ShipRocked cruise before headlining a tour of the United States with special guests TREMONTI. CANE HILL, LULLWATER and KIRRA will also be on the upcoming run of dates. The tour kicks off February 1 in Houston, Texas and wraps on March 3 in San Antonio, Texas.

In 2016, SEVENDUST received its first-ever Grammy nomination after two decades together as a band. "Thank You", the debut single from "Kill The Flaw", got the nod for "Best Metal Performance".