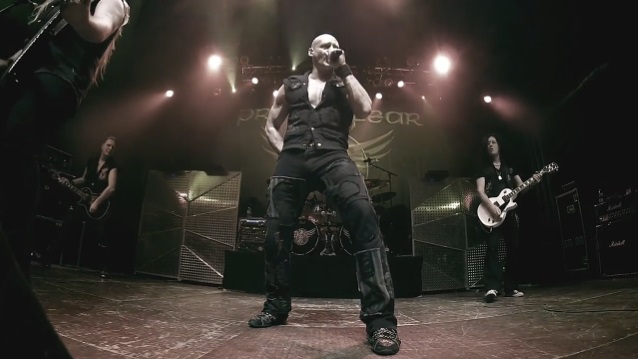 "Alive And On Fire", the new video from German power metallers PRIMAL FEAR, can be seen below. The song is taken from the band's tenth studio album, "Delivering The Black", which was released on January 24 in Europe and January 28 in North America via Frontiers Records. The follow-up to 2012's "Unbreakable" landed at position No. 16 on the Top New Artist Albums (Heatseekers) chart, which lists the best-selling albums by new and developing artists, defined as those who have never appeared in the Top 100 of The Billboard 200.

According to PRIMAL FEAR bassist and producer Mat Sinner, the "Alive And On Fire" video consists of footage compiled by the band's drummer, Randy Black, as a recap of PRIMAL FEAR's current tour, which included stops in Europe, North America and Japan. The clip features the return of PRIMAL FEAR's founding member Tom Naumann, who is filling in for the band's regular guitarist Magnus Karlsson. Karlsson is sitting out the band's touring activites during 2014 so that he can spend more time with his "little kids."

After some very intense songwriting sessions and pre-production schedule, the band started to record "Delivering The Black" in the summer of 2013 at the House Of Music studios in Germany, with Mat Sinner and engineer Achim Köhler (EDGUY, MASTERPLAN). The band then moved to Denmark in September 2013 to finish the album, with acclaimed producer/engineer Jacob Hansen (VOLBEAT, PRETTY MAIDS, AMARANTHE) handling the mix at his Hansen studio in Ribe.

"Delivering The Black", which can be ordered at Amazon.com, combines the strongest PRIMAL FEAR moments ever, with crushing songs and some very ambitious musical journeys. The centerpiece of the album are the two epic tracks "When Death Comes Knocking" and the 10-minute opus "One Night In December".