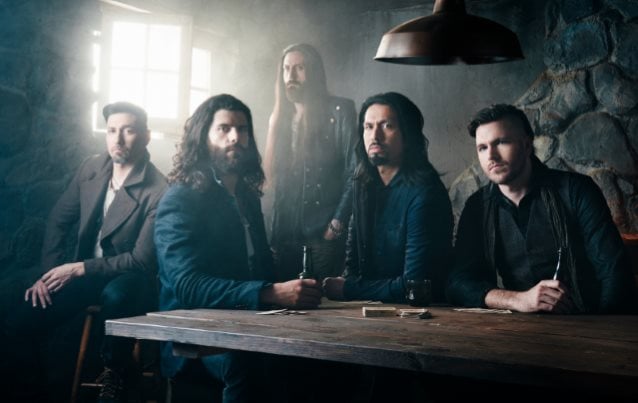 POP EVIL's brand new music video for the track "Ways To Get High" can be seen below. The clip was directed by POP EVIL's longtime collaborator Johan Carlén, who has helmed the last few visually stunning music videos the band has released, including "Trenches", "Deal With The Devil", "Torn To Pieces", and, most recently, "Footsteps".

"Ways To Get High" is taken from the band's latest album, "Up", which was released on August 21 via eOne Music. Recorded at Studio Litho, Robert Lang Studios and London Bridge Studios with producer Adam Kasper (PEARL JAM, SOUNDGARDEN, FOO FIGHTERS), the CD is "the sound of a rock band cementing a powerful identity that's steadily materialized over the course of three prior full-length slabs," according to a press release.

Regarding the track "Ways To Get High", POP EVIL frontman Leigh Kakaty said: "This song is a chance to free your mind and express yourself in whatever mood you may be in. Find your shine!"

In a recent interview with Revolver magazine, Kakaty stated about the follow-up to 2013's "Onyx": "'Onyx' came from such an angry place. I was dealing with a lot of issues, like my dad passing, and being in an independent band trying to do everything on our own; there was a lot of negativity last time around. We were so pissed off, and we were taking everything out on the music and on the record. Which was cool—but then all the success hit us in the face, and we were, like, 'Wow, we don’t have to be so mad anymore!' This time around, we looked at ourselves in the mirror and realized, 'Where's the fun?' Damn, I thought that's why we got into this business in the first place!

"One of my favorite bands growing up was RAGE AGAINST THE MACHINE," he continued. "When I was pissed off, and I wanted to break something, they were my band! I loved them, but when I was in a good mood, I wasn't listening to RAGE AGAINST THE MACHINE! Different bands gave you different moods, but I love when a band or an album can take you through all these different emotions — bring you to your knees and make you feel vulnerable, but at the same time give you the positivity and confidence you need to take on life's challenges. I wanted this album to be that kind of experience for the people who listen to it."