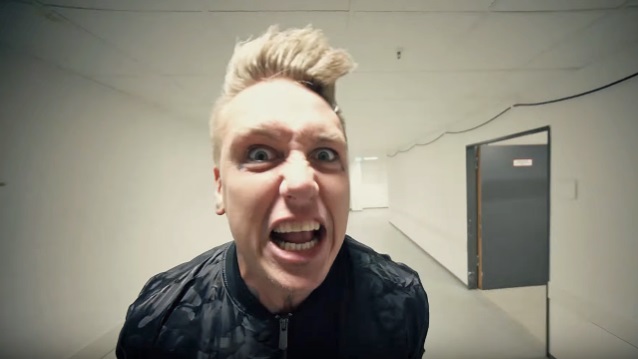 PAPA ROACH's music video for the song "Traumatic" can be seen below. The track is taken from the band's ninth studio album, "Crooked Teeth", which was released on May 19 via Eleven Seven Music.

Written and recorded in a cramped North Hollywood studio, "Crooked Teeth" was produced by Nicholas "RAS" Furlong and Colin Brittain, with the exception of "Born For Greatness", which saw the band collaborate with writer/producer Jason Evigan (Jason Derulo, Demi Lovato, Zedd, MAROON 5). Furlong and Brittain, who grew up listening to PAPA ROACH, inspired the band to revisit some of the traits that personally endeared the band to them, most notably singer Jacoby Shaddix's rapping technique and the band's intense live energy.

"The first time we met up with RAS and Colin, they said that [2000's] 'Infest' was on constant rotation when they were growing up and they wanted to bring back some of that fire," said Shaddix. Added Furlong: "The whole idea was to take the classic elements of PAPA ROACH that everyone loved and revamp them into a modern version of the sound through the creative process, and we ended up with a bold, courageous and more adventurous version of PAPA ROACH."

PAPA ROACH will return to the studio in the summer to resume work on its follow-up to "Crooked Teeth". Shaddix told TheRave TV earlier this month: "In June and July [of 2018], we're gonna step in the studio and continue working on the next record — we've already started work on the next record — and pick up where we left of with 'Crooked Teeth' and just keep kicking ass and taking names."

PAPA ROACH has been previewing a new song called "Geronimo" at some of the band's recent shows. Drummer Tony Palermo told Germany's Metal-Heads.de that the track's lyrics "are basically [about] Jacoby growing up and looking for stuff to do in a small town."