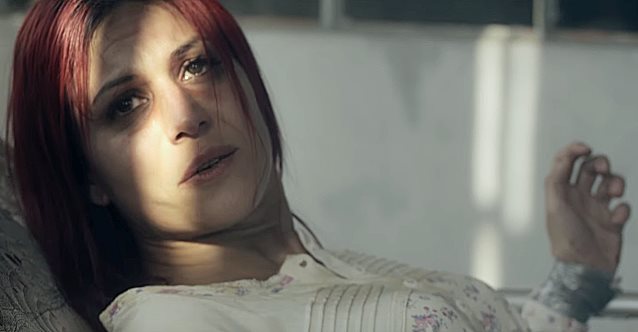 After launching a video clip for the song "Blood, Tears, Dust", Italian heavy rockers LACUNA COIL are revealing the full story of their two conceptual videos with their latest clip for the song "You Love Me 'Cause I Hate You". Like "Blood, Tears, Dust", the video was directed and edited by Cosimo Alemà and produced by the production company Borotalco.

Says LACUNA COIL's Cristina Scabbia: "The videos we shot with Cosimo Alemà are exactly what we wanted to deliver visually, especially if connected with a record like 'Delirium'. The darkness, the intensity, the script itself are taking the viewer to the dimension we wanted to be transported to. 'You Love Me 'Cause I Hate You' and 'Blood, Tears, Dust' are tightened together in a twisted story that I like a lot as there is so much that can be defined with each one's imagination. Interpreting different characters was also exciting, an interesting challenge I hadn't faced until then. I hope the viewers can capture the magic we breathed while we shot them."

Adds LACUNA COIL's Andrea Ferro: "Every age has its form of storytelling, and video clips have been a huge part of our culture. Talking with Cosimo and our label, we decided to create something to bring back the artistic quality video clips used to have. We put our love for cinema into our video for the song 'You Love Me ‘Cause I Hate You', as you will see there is a clear inspiration from TV series like 'True Detective' and also a certain 'Twin Peaks'/'Resident Evil' vibe. We wanted the viewers to contemplate the story and question what it really means. There is also a tight connection with the previous video for the song 'Blood, Tears, Dust' as both clips should be considered almost as one single piece. The videos clearly explore the main theme of our latest album, 'Delirium', and all its madness and symbols. It's been a really great and challenging experience to be on the set for several days and work in 'cinema style' for the very first time to create something completely new for LACUNA COIL."

Ferro recently told the Impact metal channel that LACUNA COIL fans will have to wait at least a couple of years for the follow-up to "Delirium". "Next year's gonna be twenty years of LACUNA COIL, so first we're preparing some surprises for next year, and then after that maybe we'll start working on a new record," he said. "So I don't think there will be a new record at least until 2019."

Scabbia and Ferro revealed to the Brazilian metal channel Heavy Talk earlier in the year that they were planning "something special" to celebrate the twentieth anniversary of the release of their self-titled debut EP.