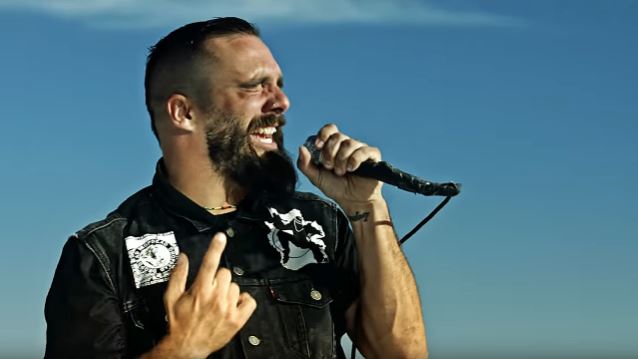 "Cut Me Loose", the new video from Massachusetts metallers KILLSWITCH ENGAGE, can be seen below. Directed by Jeremy Danger and Travis Shinn, the clip was filmed on September 8 in Utah's world-famous Bonneville Salt Flats. The video is said to be "a new imagining" of the powerful song from the band's latest album "Incarnate", which was released in March 2016 via Roadrunner Records.

Speaking to Metal Hammer, KILLSWITCH ENGAGE frontman Jesse Leach stated about "Cut Me Loose": "My vocal work on this album is the best I've ever done.

"I got my voice in shape from touring and sort of hit my stride, and instead of resting on my laurels, I wanted to take it up a notch.

"I got comfortable with the higher register of my voice and decided to play with it a little bit.

"I actually sat down at a piano with my vocal teacher and learned where my range is. I'd shy just from the top note of that range where certain vowel sounds were easier to hit.

"Knowing your voice and your instrument is important, and I wrote this song very specifically for the top of my range. It's a really personal song, too.

"There's a reason why I reference the word 'noose' in the chorus and it refers to a time when I felt suicidal.

"The song is about looking back on your life, taking stock of where you are and the pain that you've experienced. But the song isn't just about me — it's a mixed message and 'noose' is the key word.

"The song is pretty dark if you read the lyrics with that in mind."

In other KILLSWITCH ENGAGE news, the band will once again participate in Record Store Day festivities. For Black Friday/Record Store Day on Friday, November 25, the Grammy-nominated hard rock band will release "Beyond The Flames: Home Video Part II". The release is a two-disc, Blu-ray and CD package and is exclusive to Record Store Day. Watch the trailer below.

"Beyond The Flames: Home Video Part II" is a treasure trove of gripping content containing over three and a half hours of footage that is sure to delight KILLSWITCH ENGAGE fans. At the heart of this release is a 75-minute documentary that chronicles the return of Leach, after nearly a decade of being apart, to the band he helped form back in 1999.

2016 saw KILLSWITCH ENGAGE appearing on a "Stars Wars"-themed Revolver cover, staging an unforgettable and intimate, five-club New York City takeover for album release week, and embarking on an impressive "Incarnate" world tour. The band also released a limited-edition seven-inch single as part of the spring version of Record Store Day on April 16; it featured "Define Love", an unreleased track from the "Incarnate" sessions.

With further plans for Europe, Australia, North America, South America and Asia in the works, 2017 is shaping up to be an equally busy year for KILLSWITCH ENGAGE. More U.S. tour details will be revealed soon.