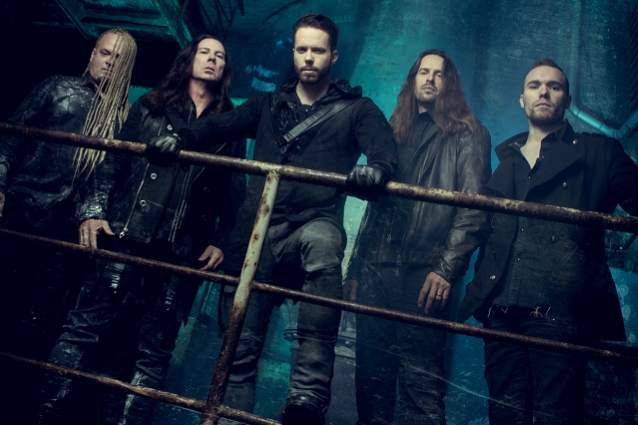 KAMELOT has released a brand new music video for the song "MindFall Remedy". The clip, which includes a guest appearance by Lauren Hart (ONCE HUMAN), was directed by Thomas Crane of Killdevil Films and features live footage from the band's recent North American tour.

KAMELOT guitarist Thomas Youngblood said: "The North American tour was our biggest ever and we had to chronicle it in some way; the fans were so amazing. We decided to shoot this video and mix in scenes from the tour. We cannot wait to return to the U.S. and Canada for the next run!"

The meaning of the song and title "MindFall Remedy" sparks some debate, but KAMELOT singer Tommy Kaverik sums it up beautifully: "In this material world full of vanity and beautifying filters, it is easy to turn to those things when looking for validation and comfort. We have come to expect external gratification to lift us up, solve our insecurities and give us a meaningful existence. With this song we want to encourage people to look inside themselves for answers. Only then can we fully learn to respect and love ourselves and grow as people. There is a way to unlock your inhibitions, and only you possess the key."

"MindFall Remedy" is taken from KAMELOT's latest album, "The Shadow Theory", which was released on April 6 via Napalm Records. The follow-up to 2015's "Haven" was helmed by acclaimed music producer Sascha Paeth and mastered by Jacob Hansen. Guests on the album include Hart, Jennifer Haben (BEYOND THE BLACK) and Sascha Paeth. The cover artwork was created by Stefan Heilemann.

Youngblood previously called "The Shadow Theory" "a psychological journey through the complexity of the human mind. We are subjected to stimuli constantly through media, technology, social experiments and AI," he said. "Can we still be social creatures in the near future? 'The Shadow Theory' is an album that is mixing many worlds, giving the listener an ecape within our own realities. This album was written and recorded over the entire year and we are really proud of the song elements and diversity on 'The Shadow Theory'."

Karevik told The Psychosin Project that "The Shadow Theory" should "definitely" be viewed as a continuation of "Haven". "There are some similarities," he said. "We felt we weren't done with that kind of sci-fi, dystopian, futuristic platform. We felt we wanted to explore that a little bit more on this one. We all love sci-fi, and the future is so exciting — you don't know what's going to happen — so for us, it was a no-brainer. When Thomas decided to base it around Carl Jung's shadow aspect, the psychological aspect that everyone has a shadow, and unless you embody it, the darker and bigger it gets, that was a very interesting starting point, psychologically, for the whole theme. Then we decided to not make a story like '[The] Black Halo' or 'Silverthorn' was, where you can follow characters, but more loosely based theme — how we portray the world, basically."