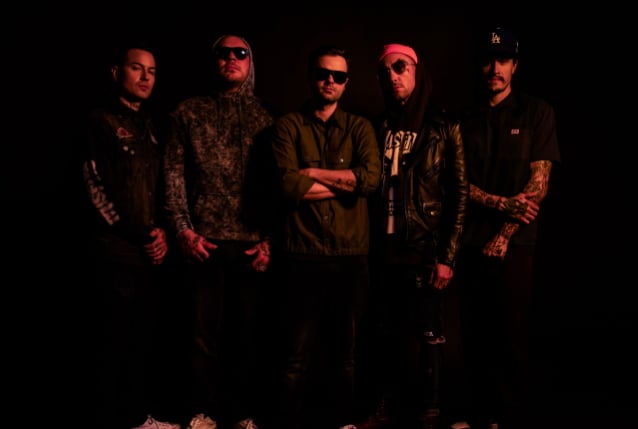 HOLLYWOOD UNDEAD's official music video for the song "Nightmare", can be seen below. The track is taken from the band's sixth full-length studio album, "New Empire, Vol. 1", which was released on February 14 via Dove & Grenade Media/BMG.

HOLLYWOOD UNDEAD stated about the "Nightmare" clip, which was shot in quarantine: "Nightmares are defined as dreams that bring out strong feelings of fear, terror, distress or anxiety. They feel more vivid or intense than a bad dream, and nightmares are often differentiated from dreams when they cause the sleeper to actually wake up and experience intense feelings upon waking."

"New Empire, Vol. 1" features fiery, high-energy tracks that reveal HOLLYWOOD UNDEAD embracing a heavier, hard-rock sound with this effort, not to mention sharpening their signature sound to knifepoint precision on the nine songs, with guest vocals from Kellin Quinn (SLEEPING WITH SIRENS) on "Upside Down", and GOOD CHARLOTTE's Benji Madden on "Second Chances".

Vocalist-bassist-guitarist Johnny 3 Tears told Billboard about "New Empire, Vol. 1": "In the past, we have built on what we had done on the previous album — little transitions and little progressions. On this album, we tried to pretend we had never made a record before. We made a concerted effort to take it back to ground zero, as if we just got a record contract. Like, what would we write had we never released any music? 'New Empire' is the product of that outlook."

Regarding HOLLYWOOD UNDEAD's musical direction, Johnny 3 Tears said: "I consider us industrial hip-hop — an amalgamation of NINE INCH NAILS and THE BEASTIE BOYS. There are rock elements, but it's more geared toward industrial sounds. We use a lot of 808, a lot of programmed beats along with live drums. But it's all open to interpretation."